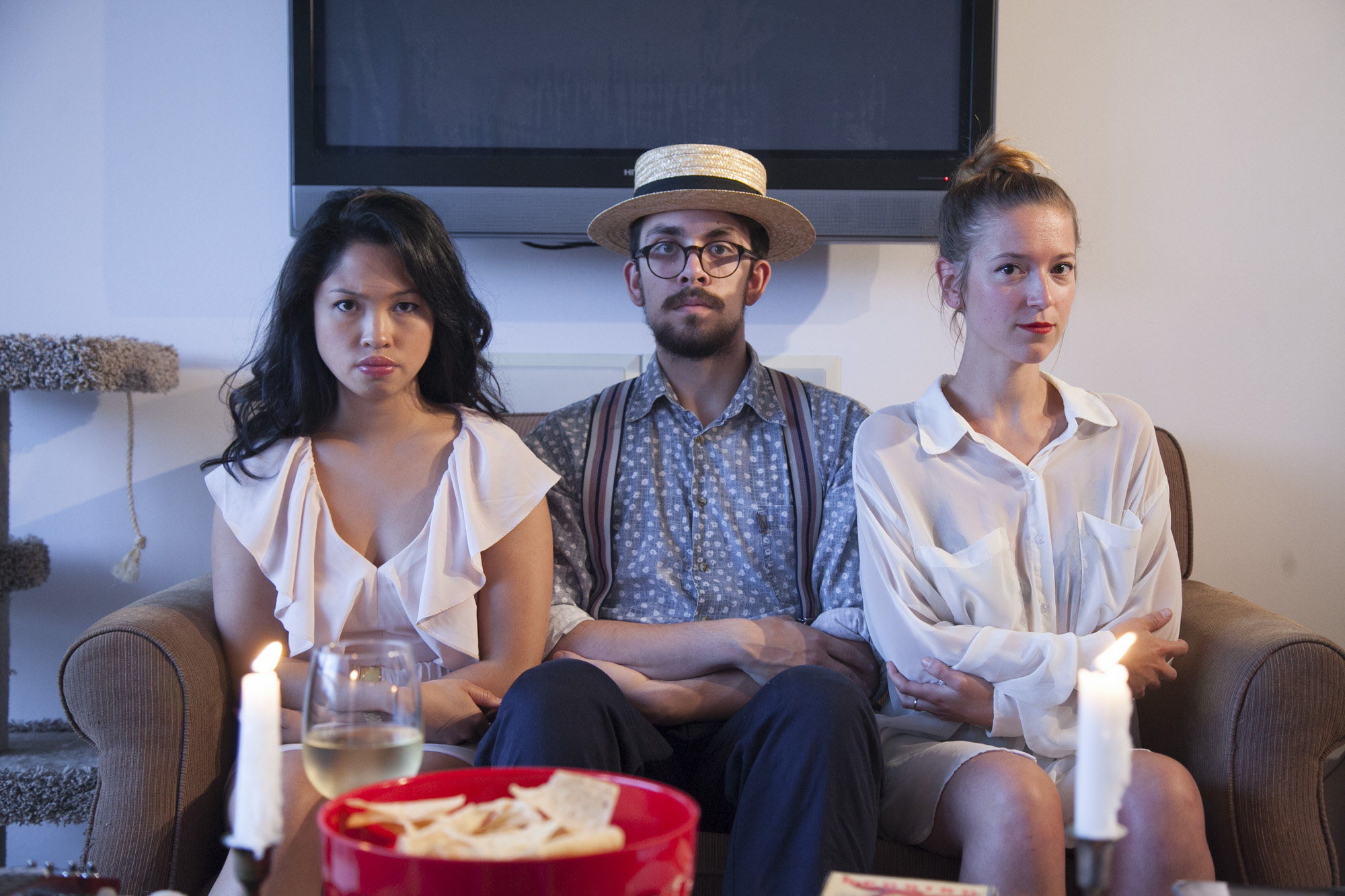 We belong in show business. We gotta start young so we can get some steel in our backbone. Well, gee, we’re developing. You couldn’t teach us a trade: we’ve GOT one. And you couldn’t do without it… Oh, we’re only kids now, but someday we’re gonna be the guys that make ya laugh and cry and think that there’s a little stardust left on life’s dirty old pan.

It is a ritual that has been repeated in theatres across the planet, at least since the advent of electricity: the house lights are dimmed and raised, dimmed and raised, signaling that a performance is about to begin. Shortly after 9:00 pm on a late-July weeknight, director Sarah Faye Bernstein, walks into the kitchen and flips the light switch a few times.

The open, semi-cluttered kitchen is not a theatre set or a make-believe scullery; it is an actual kitchen, the most central place in Bernstein’s small apartment. The boxes of Cheerios and Raisin Bran on the far counter are not props; they are what Bernstein or her roommate eat for breakfast. The flashing overhead light falls on an audience seated here-and-there in the living room, sipping wine and popping hors d’oeuvres. 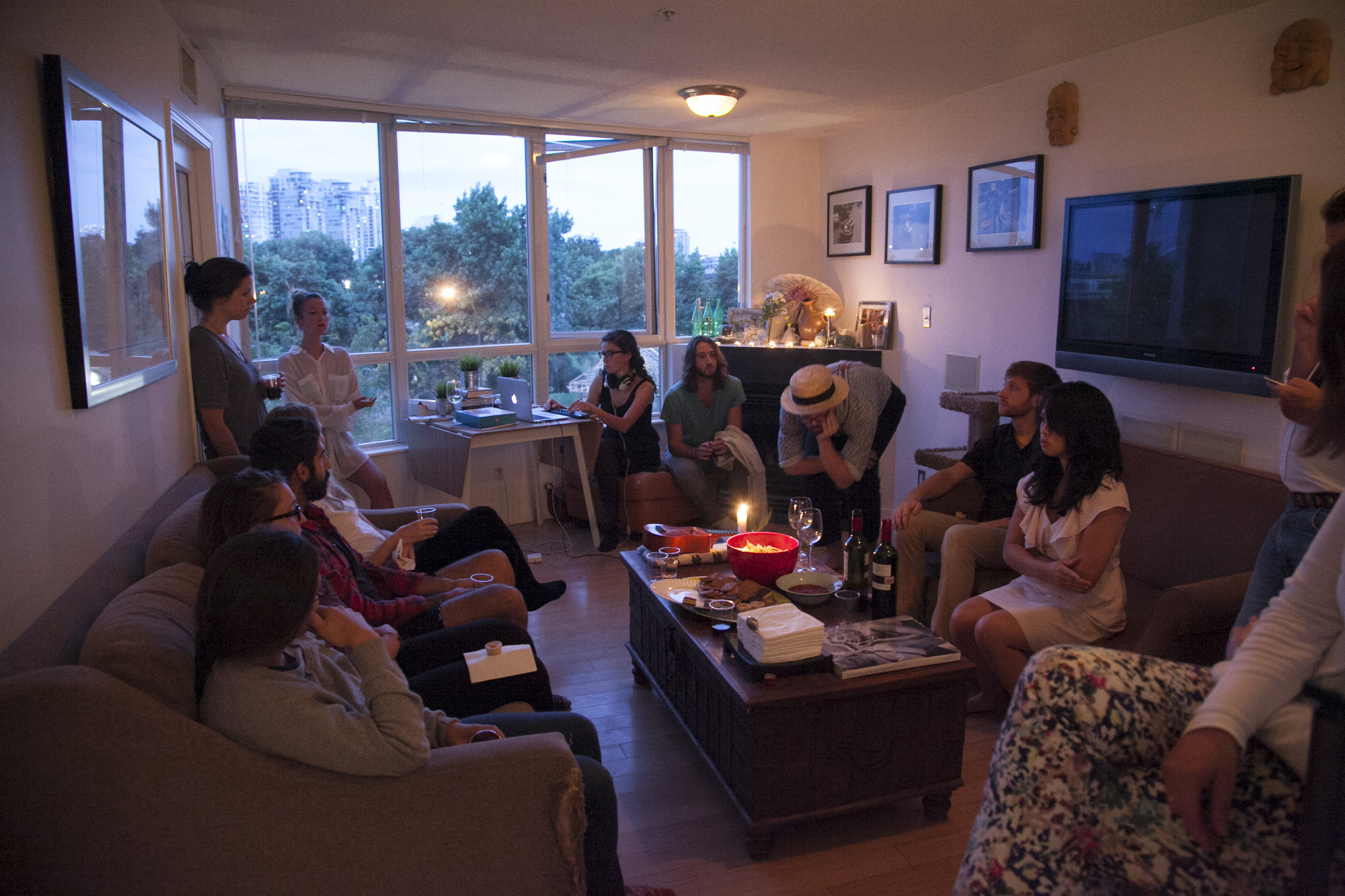 They have arrived at the appointed hour, in response to a cryptic email invitation: “You are invited to a top secret, limited seating, special event: a party in my apartment. There will be an experience.” Invitees were requested to reserve a date to attend something called “Apartment(PLAY)”, advised that admission was $10, and given a link to a YouTube clip of a bored-looking, ever-so-past-it Boy George lip-synching his way through the Culture Club hit, “Do You Really Want to Hurt Me”. The presumptive audience was told nothing more: the nature of the “experience” was left an utter enigma, with a couple inscrutable clues thrown-in as if a private joke. All to be revealed in good time. Who would come? Everyone and then some. The week-long run was quickly sold-out.

The audience is never told the name of the one-act play that commences around them, although a copy of the open script is left casually on the nightstand in Bernstein’s bedroom; and the title had been obscurely camouflaged within the invitation itself. It’s a matter of rights acquisition from the persnickety estate of a deceased playwright, famous for its aversion to deviation from orthodoxy. Bernstein’s production is a long way from orthodoxy. Pirate theatre it shall be!

DJ Annie Therrien-Boulos mixes electronica and what might be the sounds of a cocktail party – the very noise the audience is not making, but by all-rights should be – over the sweet strains of Mel Torme singing “Blue Moon” as the three actors silently, physically establish their characters and join the audience in the living room. They begin to tell the story of their love triangle. The interplay among them is intense, as if they are in a three-way conversation; and yet they are neither speaking to each other, nor to the audience. We are witnessing three distinct interior monologues – three retellings of the same story. It is Rashomon, delivered in parallel, rather than serially. 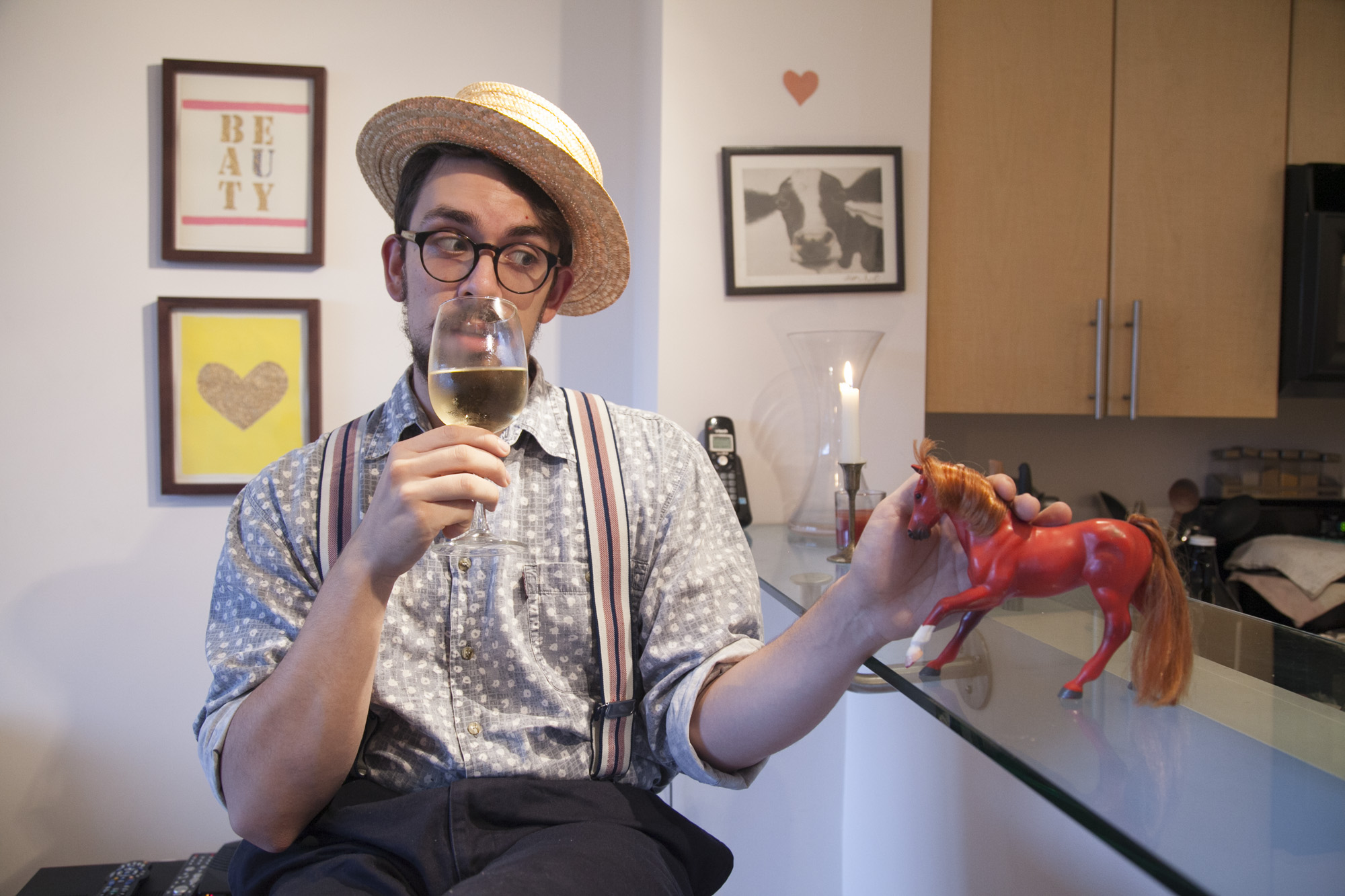 Carmine Santavenere plays a man in the middle of a secret affair come-to-light. He is more bemused than alarmed at the agitation caused by his wife’s discovery of the dalliance. The revelation feeds his narcissism and the resulting melodrama, while inconvenient, seems to enrich his experience of the affair. Bernstein’s living room is his space: casual, comfortable, in party-mode. Santavenere’s character refills wine glasses and passes snacks to the guests while continuing to interchange lines with his wife and his lover. He is both sociopath and bon vivant. 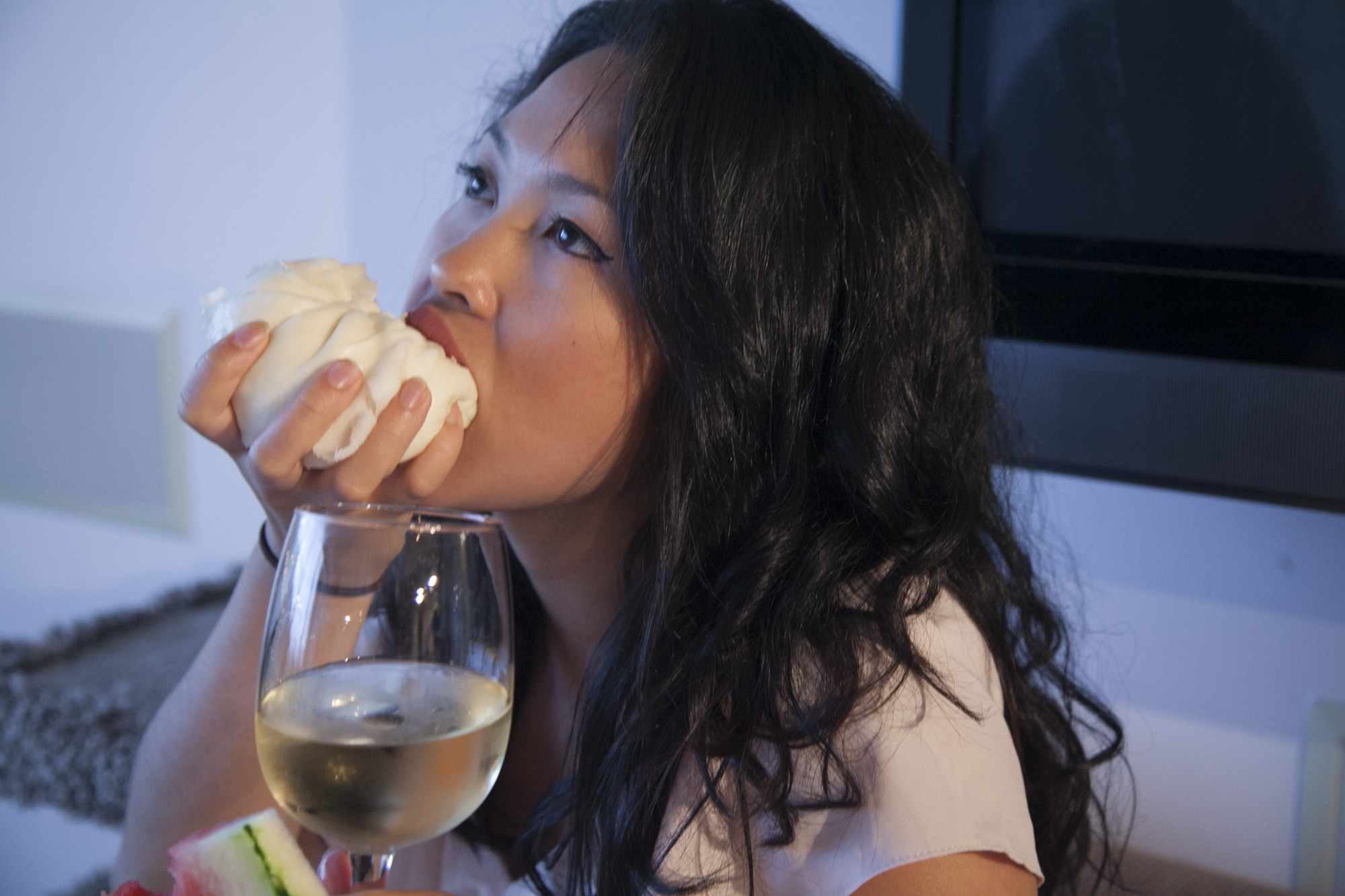 Anjela Magpantay plays his hard-done-by wife. She seems prouder of her detective work (“I smelled her on him”) than displeased by what she has uncovered. She is bound-and-determined to draw power from an ostentatious magnanimity toward the lover and a calculated forgiveness of her husband, even as their self-absorption denies her that small victory. 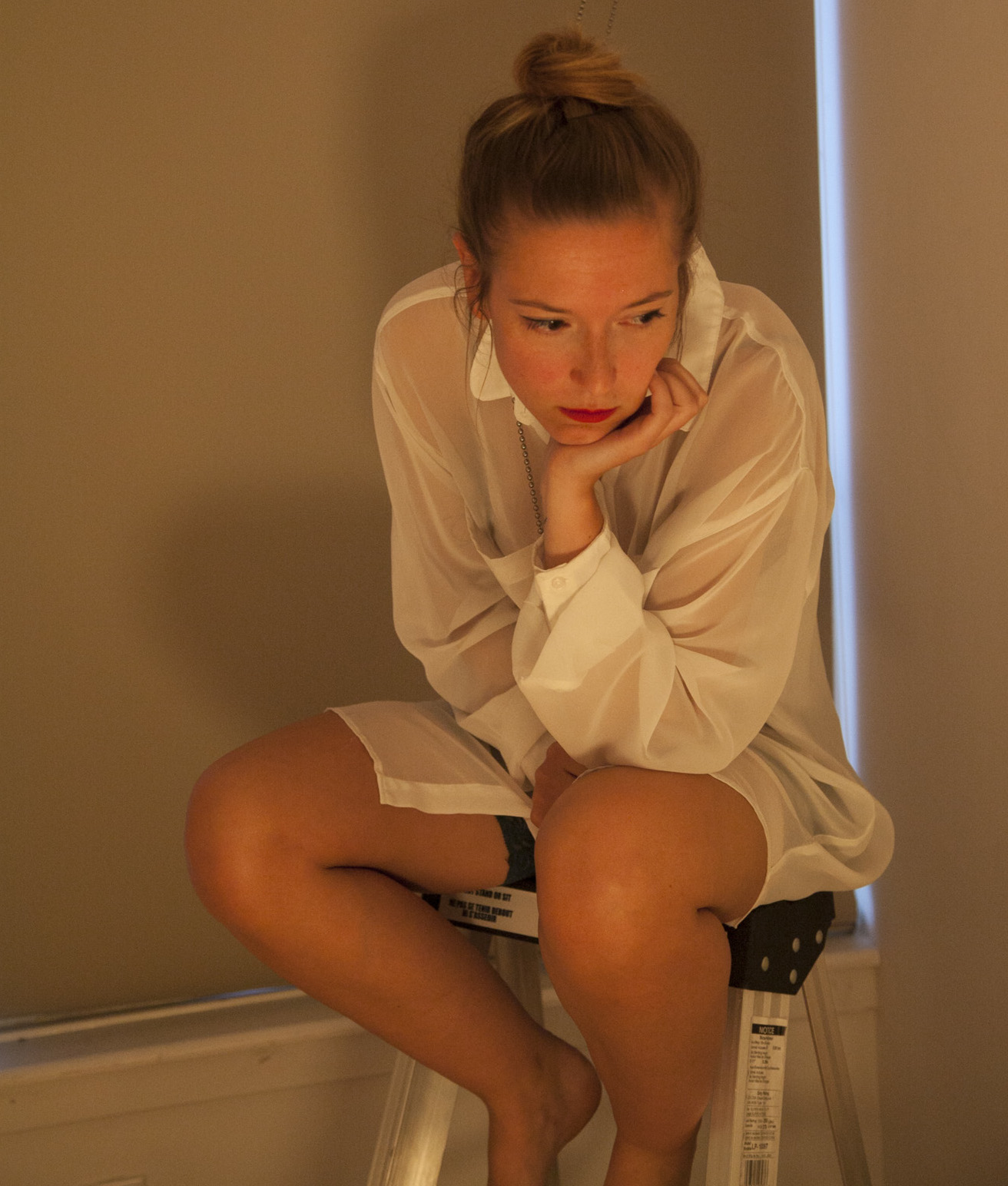 Jamie Taylor animates the lover, for whom sexual coupling is a competition. Like the others, she takes the fallout in awkward stride – but for one thing: she can’t quite reconcile losing a game she feels destined to have won. This, more than the disappearance of her lover, leaves her feeling “unhinged”.

Santavenere, Magpantay, and Taylor deliver the dialogue with such skillful emotional clarity, the audience is scarcely aware of the complexity of the language or the difficulty in teasing-out the narrative from such a deliberately artful script. The performances transcend the challenges of the writing, the relative flatness of the characters, and the structural barrier of “talking past each other”. The players are able to convey a psychologically intricate story from pretty bare expository bones. This is a credit to both their astonishing individual talents and deftness with which Bernstein (with the canny assistance of dramaturge Nancy Tam) has woven them together. The intimacy of the performance space enhances our access to personalities we’d probably rather feel we didn’t fully understand.

Therrien-Boulos brings-up Ella Fitzgerald and Louis Armstrong singing Gershwin’s “Bess You Is My Woman Now” (nicely selected by music supervisor Clinton Ackerman) as the actors repair to the bedroom for the second scene. When the audience joins them in the cramped room, they are sitting-up in Ms. Bernstein’s bed, under the covers, their heads and torsos swaddled in bath towels with only their faces exposed, looking a bit like matryoshka dolls. LED lights – held just out-of-sight beneath the duvet – illuminate their faces as they deliver their lines in rapid-fire monotone: the very same lines they delivered in scene one. As the dialogue flashes from one player to the next, so too does the illumination. The effect is pyrotechnic in every sense. The seamless swiftness of the recitation and the synchronicity of the lighting is jaw-droppingly impressive.

The magic is no less stunning for being performed in plain view of the audience. On the floor, at the foot of the bed, sits the mastermind of this (literally) brilliant staging, Daniel O’Shea. His laptop is open before him, showing the sequence of the actors’ lines. His gloved right hand is propped on-elbow, visible as a cue to the actors who stare blankly ahead. An electrical contact is attached to each of the glove’s three long fingers – one for each actor – and another on the thumb. As O’Shea’s thumb moves from finger to finger, closing the circuit, the light shifts from face to face and the dialogue passes from character to character. The actors are illuminated in speech and instantly cast into darkness as they yield to another’s lines. In keeping with the informality of the production, Bernstein originally rigged this lighting effect with the flashlight app of her phone and a toilet paper roll. O’Shea shook his head disappointedly and murmured, “Let me make something.” “Just bring me the receipts,” she replied. 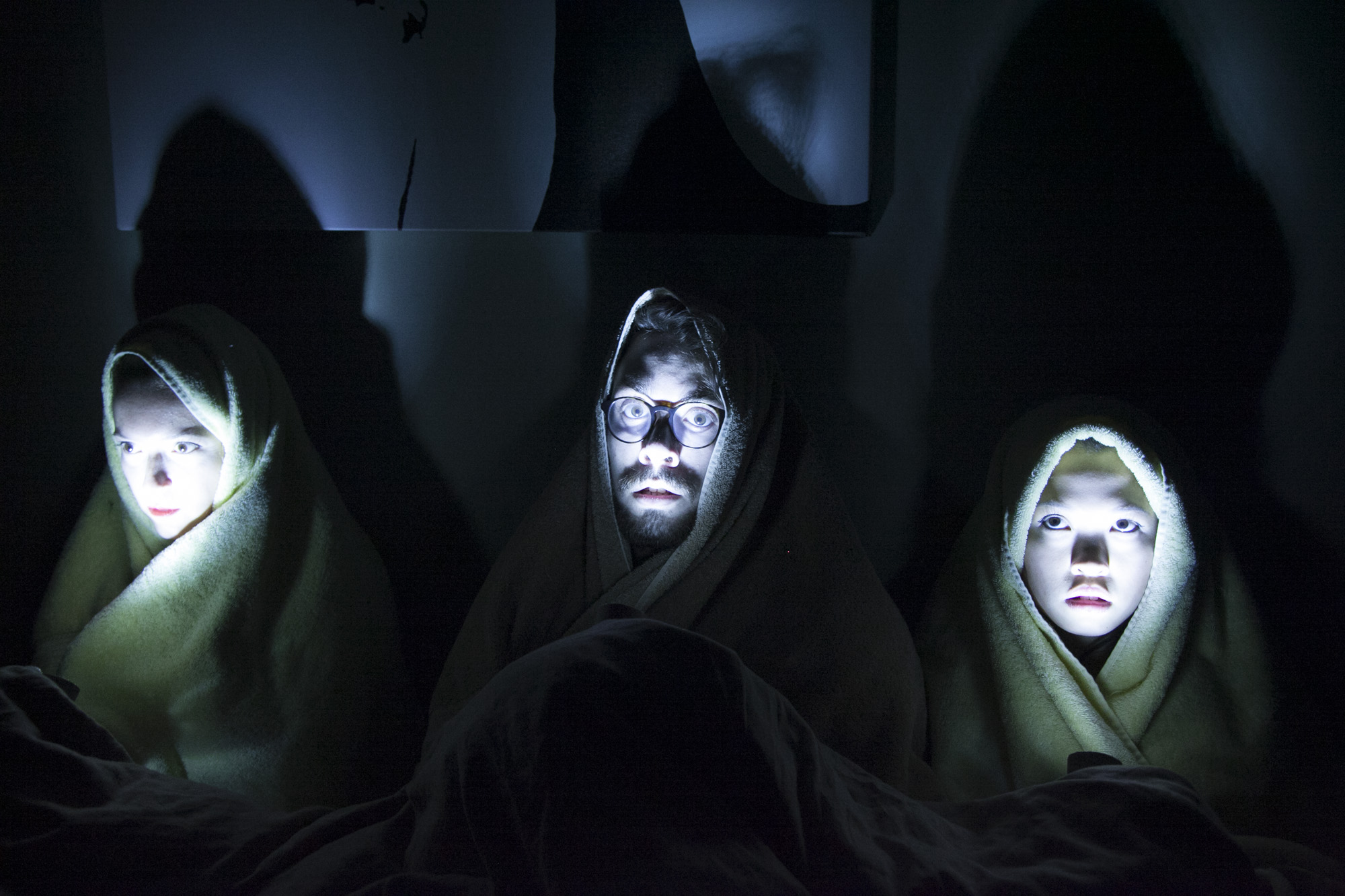 As composed by Bernstein, scene two is ironic in every conceivable way. Though the characters in this psycho-sexual drama are (quite literally) in bed, the effect is to strip away any sense of intimacy among them. Devoid of the emotive resonance with which they were delivered in the living room, the starkly spoken words emphasize the characters’ deep pathologies and the narrative goes missing. (In any case, we already know the story.) The staging is stripped bare while the actors are all-but-concealed. The sequential illumination of the actors effectively eliminates two thirds of the protagonists at any particular moment, thereby abnegating the very interplay giving-rise to the revealed interiority. 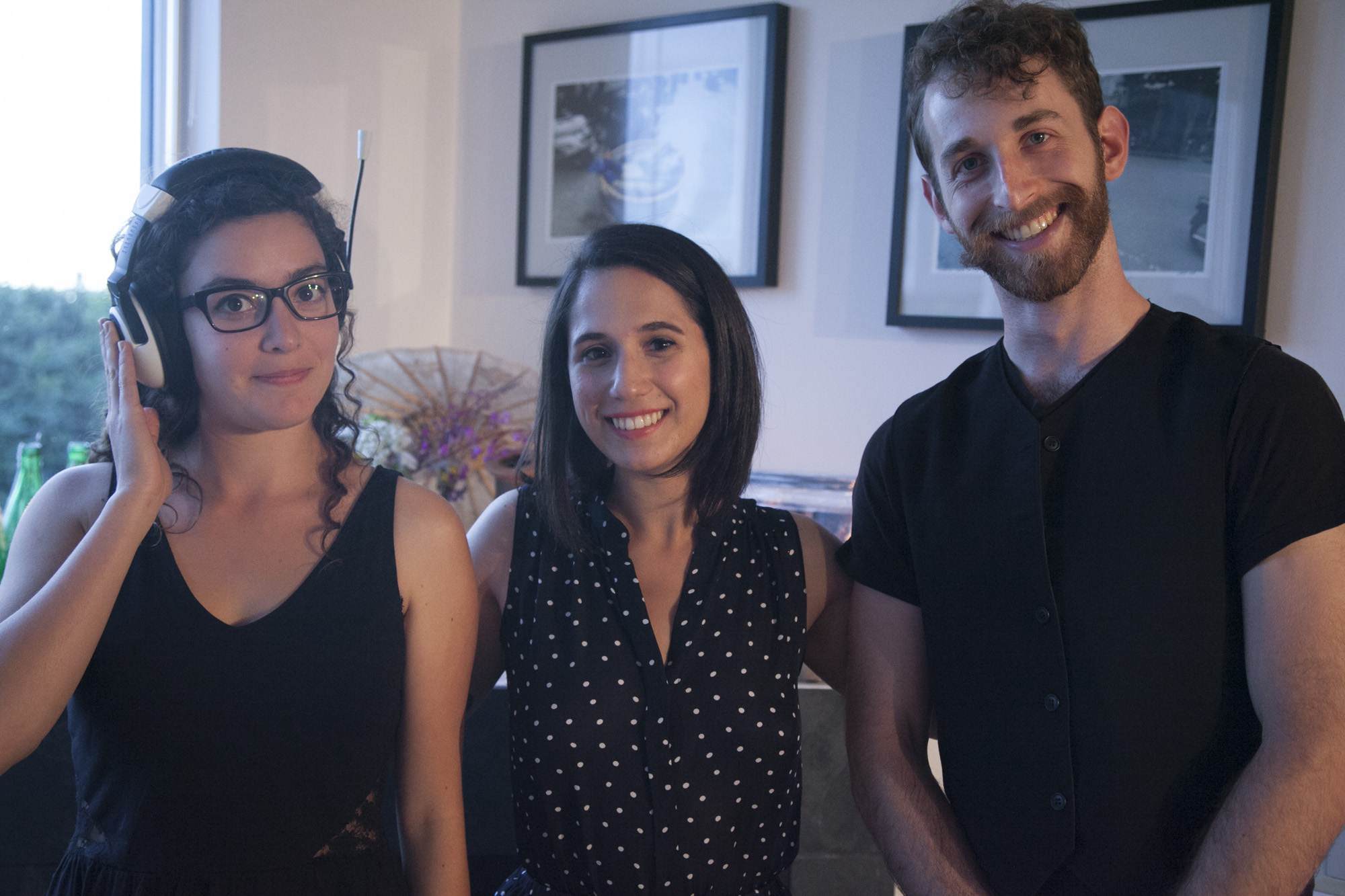 Bernstein conceived the production as part of her ongoing collaboration with Taylor: the Jamie and Sarah Experience Project. The moniker they have given themselves is a fun double entendre. It captures their desire to give audiences “an experience” of their zany experimentalism (check-out their podcasts) – with a touch of goofily heavy-handed anachronism, à la the Jimi Hendrix Experience or the Alan Parsons Project. But it also neatly describes two emerging theatre artists striving to get experience – to stay active, create work, practice and perfect their craft, and begin to establish themselves. Bernstein acknowledges that making-it in the arts is a challenge; but she addresses the task with diligence, persistence, sustained optimism, and passion. Apartment(PLAY) was one step in that process.

Bernstein and Taylor both recently received bachelor’s degrees in fine arts from Simon Fraser; and the rest of the Apartment(PLAY) team are either recent or soon-to-be-recent graduates of SFU. Bernstein wanted to make a work to engage the whole cadre. The ensemble committed to four hours of rehearsal, four days a week, for three solid weeks leading-up to the show. “I wanted it to be fun. Like summer camp,” says Bernstein. “But we worked hard, just as if we were doing this in a regular theatre.”

Bernstein’s energy, discipline, and willingness to work outside-the-lines seem to represent an important and promising trend in the city’s emerging art scene. With access to proper venues limited, more-and-more young artists are availing themselves of unconventional spaces and producing their own shows. Babes in arms no more!

One Response to Hey Kids, Let’s Put-on a Show!