Secrets From The Arctic Battleground

Except in the Unlikely Event of War is the perfect mix of contemporary and traditional, humour and raw politics. And what better way to bring a political message to the masses than through three timelines, complete with comedic moments, terrific acting, constant movement, and even reality television-like video footage and scenes portraying the actors as themselves working on this play. 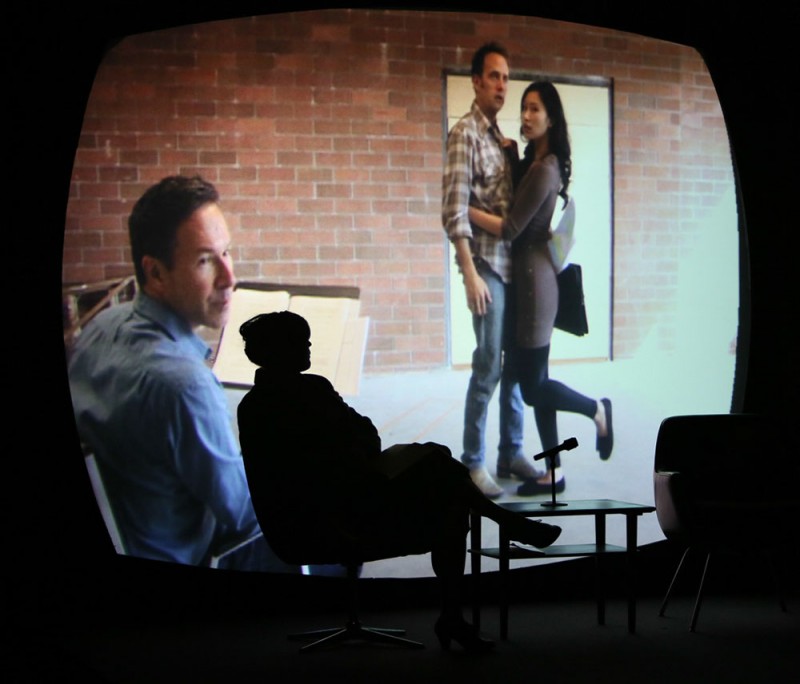 Now, the three timelines are a bit confusing to explain, but I’ll try. The play is inspired by the book Report from Iron Mountain which, at the time of its release in the 1960s, caused major controversy, as it claims that a secret panel of 15 men concluded that war is necessary for governments to retain their power. Years after the initial publication of the book, reports came out that claimed the content was an elaborate hoax, it is even in the Guinness Book of World Records as the most successful literary hoax. However, some people still believe that it is authentic, so we may never know for sure. 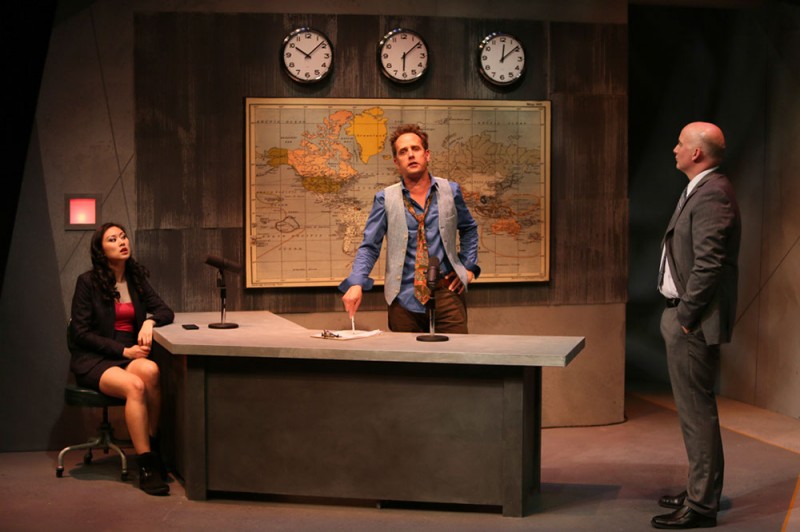 The first story takes us to Canada’s arctic in 1965 to watch a secret gathering of intellectuals discussing what consequences might arise if the world ever achieves permanent peace. The main character of this section, John Doe (played by Robert Maloney), has taken the secret documents obtained through the meeting and decided they need to be shared with the world.

The second story jumps to our near future, 2015, at the same military base in the arctic. Canada still has Stephen Harper as Prime Minister and he is still exerting a heavy hand on news reporting sources. The arctic at this point is now a hotbed for governmental deals as the countries try to stake a claim to the vast amount of resources than can be found within the Arctic region. A suspected Chinese war submarine has been spotted off Canada’s shore, and an election is only 60 days away, with Harper showing a marginal lead.

The final story takes us to the present, as the actors playing themselves are rehearsing a play that involves the other two timelines. 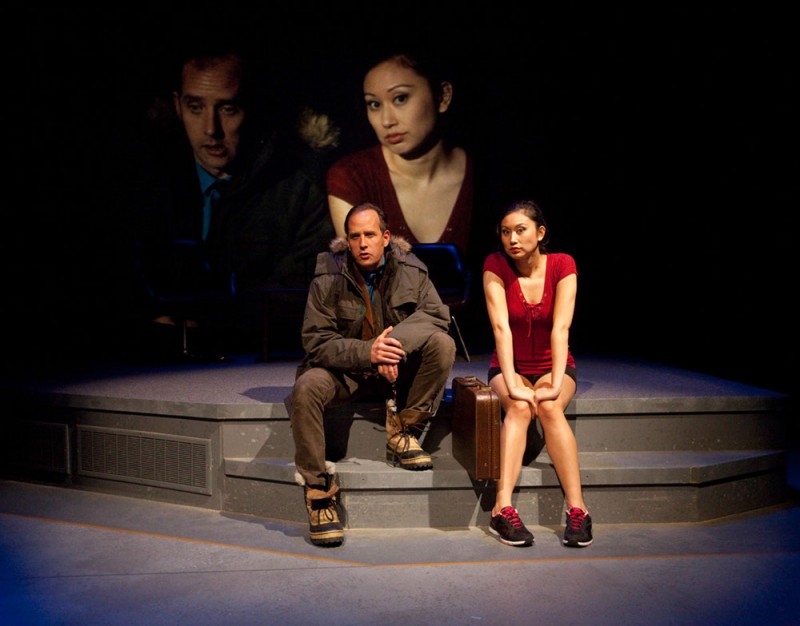 Sean Devine has written a piece of intertwining timelines with references to our past, present and future. The switching back and forth between 1965, 2013 and 2015 could have easily lost an audience had it not been wonderfully juxtaposed against simple and clear blocking; the use of traditional stage elements such as dedicating specific areas for each era, and using different lighting qualities to keep the multiple characters separate. 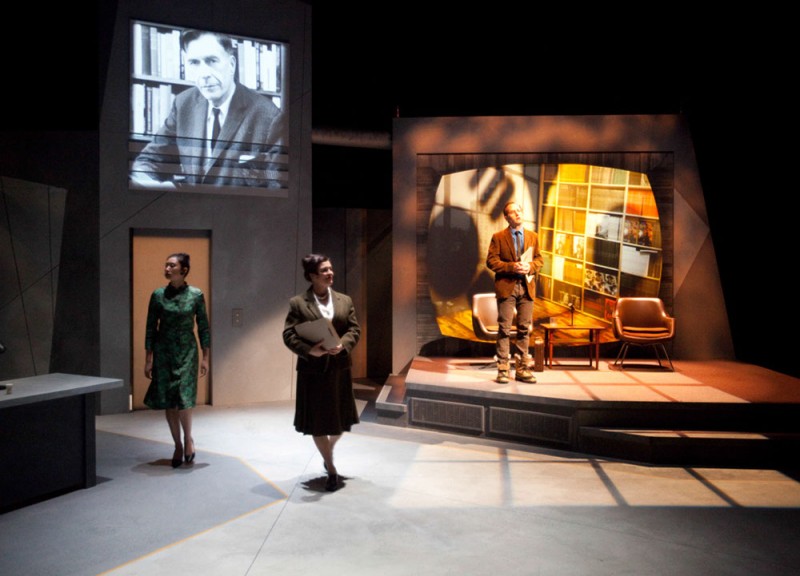 The partnership between Devine and director Richard Wolfe shows their ability to create a story that is light and entertaining while at the same time getting you to question our current and future political prospects. How much can we actually trust the news we get through media outlets? Can we be sure that there isn’t a Harper crony standing behind the camera dictating what the public is allowed to know? And what liberties are we willing to give up in order to enhance Canada’s economics? 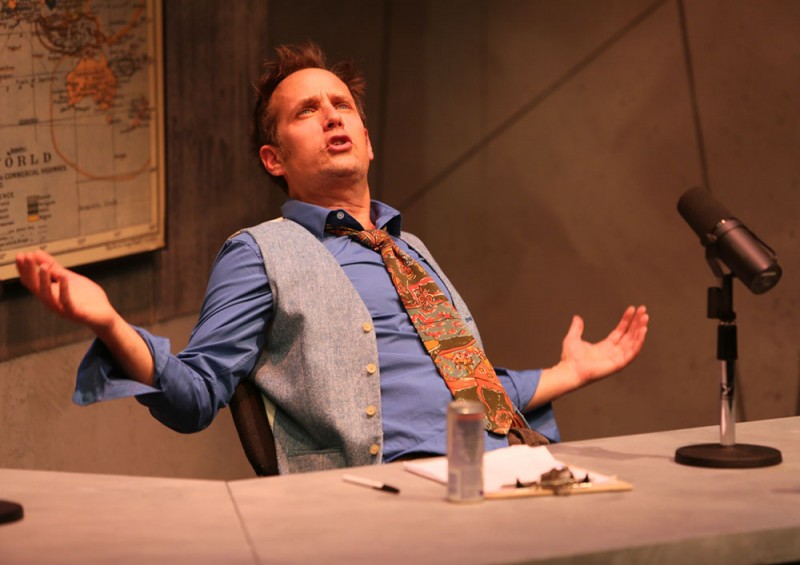 In a discussion with Wolfe after the show, he told me he’s noticing that people my age, audience members under 30, seem to have an easier time following the twisting storylines. Possibly because we are so used to the constant bombardment of information from multiple sources. But I would still argue that the clean and simple world that Devine and Wolfe created definitely keeps the viewer interested and engaged. And the acting didn’t hurt either. 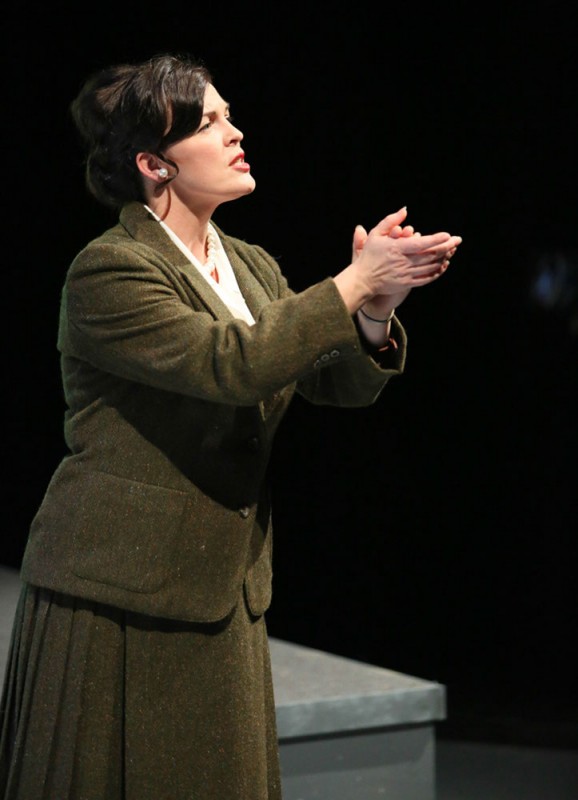 I must commend all the actors on stage who expertly fit the sometimes larger than life personalities of the characters. All four actors play different characters depending on the timeline of the scene. And while some characters are more developed and engaging than others, as an ensemble they create interesting snapshots of real life characteristics. Especially the interplay between Josette Jorge and Robert Maloney. You are drawn into their relationship by the odd sexual tension that develops throughout the play. Lucia Frangoine adds some well-timed and articulated humour to each scene she’s in, although her appearances on stage are limited. And although Sean Devine’s voice doesn’t cut through the air like the other actors’, his soft-spoken lispy vocal quality worked as the unappreciated and creepy playwright. 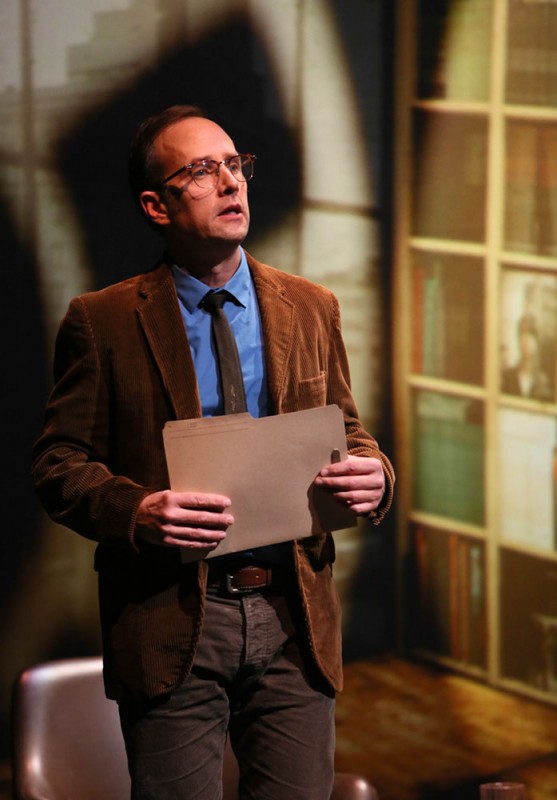 Except in the Unlikely Event of War is not an in-your-face sort of political satire, but with the real concerns about the arctic and what countries should have claim to its resources, to the increasing sense of censorship developing under the Harper regime, it’s topical enough to still incite discussion. And I’m glad it wasn’t a play that slapped you in the face, as I find that I begin to check out when people try to tell me how I’m contributing to the oppression of civil liberties. It’s the subtleties that make a stronger impression: the limited direct references to Harper and his use of fear to sway an election, mentioning the melting icecaps while refraining from overt blame, and the humour used to acknowledge the decrease in funding for art projects.

It’s not a radical idea to suggest that Canadians as a whole need to revitalize our energy towards politics. More people showed up for the 2011 election than the previous one, but the total still only came to just over 61 percent. We as citizens should start being a little more concerned about what’s happening in our capital. Here’s hoping that the questionable actions of our current leader inspire more people to exercise their democratic right the next time an election comes around.

Except in the Unlikely Event of War is a new work by two of Vancouver’s renowned theatre companies, Pi Theatre and Horseshoes & Hand Grenades (HHG) Theatre.

The show’s world premiere, it ran November 15 to 30, 2013 at the Roundhouse Community Centre in Yaletown.

Papergirl Strings Together Artists of All Ages and Abilities