Re: The Fox at UNIT/PITT Gallery

Words and photography by Adam Stenhouse

1970’s New York was a particularly influential time for contemporary art discourse: The optimism of the 60’s had given way, crime and social disorder were serious issues, the US was in shock at the prolonged involvement with Vietnam, and the economy was stagnant. Yet from this morose time grew significant forms of cultural creativity in art, dance, music and theatre. From the emergence of Punk to Steve Reich penning Music for 18 Musicians, from Gordon Matta Clark’s site specific art to Trisha Brown’s dance pieces, to name but a few, the Arts changed at a rapid and dramatic pace. These creators forcibly developed the open and inclusive culture that allow much of today’s contemporary art to exist.

A significant role in the discourse created around this dramatic transition was played by The Fox, a theoretical and cultural journal produced by the New York wing of the Art & Language group. The Fox only lasted three issues, yet has had a continuing impact since, as well as representing a specific moment in art history. At UNIT/PITT, Arnaud Desjardin and John Slyce have reproduced all three issues of The Fox for contemporary audiences. Re: The Fox continues UNIT/PITT’s commitment to cultural and political commentary through art. 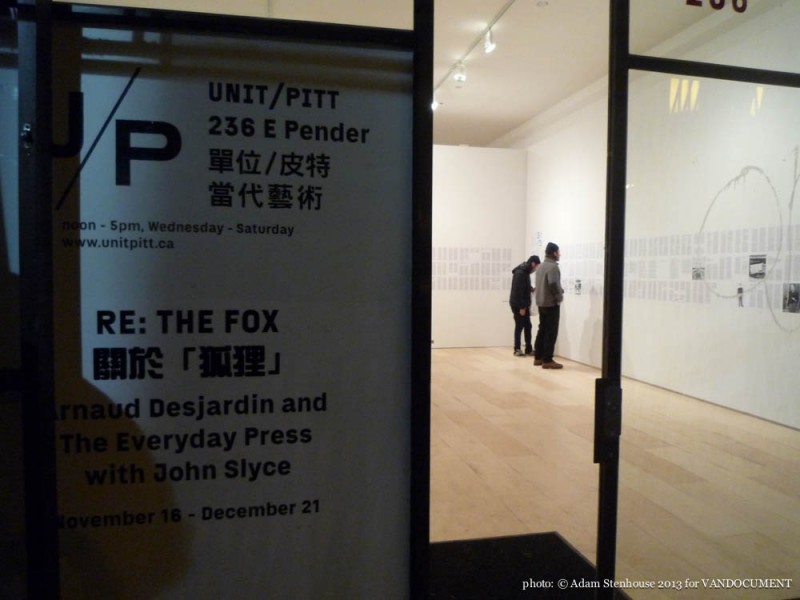 Inside, the sparseness of the show is pretty obvious; each edition of the magazine takes up one wall, the pages pasted in long, slim lines. It raises an initial question that has troubled me for some time now: How do you exhibit a book in a gallery? Many galleries have tried and, to be honest, failed. I was deeply disappointed in the Vancouver Art Gallery’s (VAG) handling of Art Spiegelman’s retrospective. Pinning page after page to the wall tied the viewer to small sections of the gallery for long periods of time, which in a place as busy as the VAG, became a constant fight to jostle for position. This meant that due to apathy I didn’t look at many of the articles on display. This is also a physically and mentally exhausting activity to undertake: trying to read page after page after page while standing is tiring. 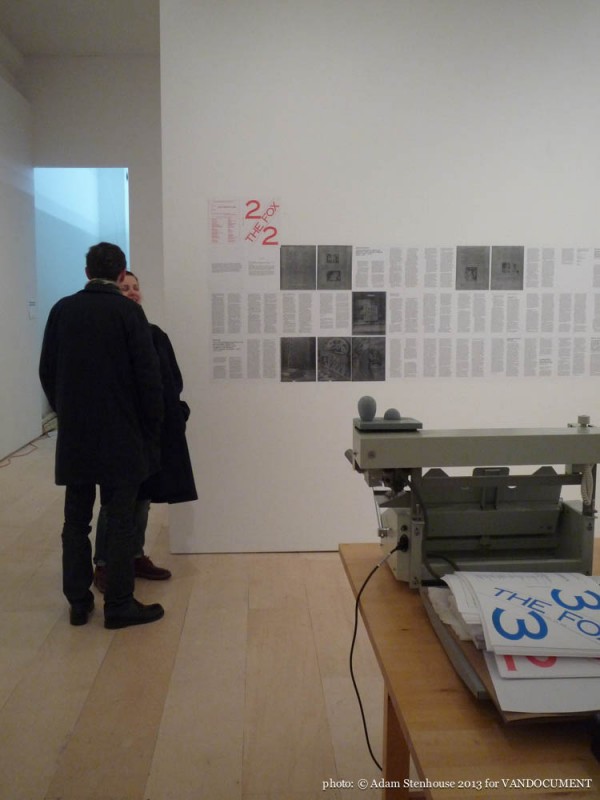 I was also left a little underwhelmed when I was last in London, UK and saw the Daido Moriyama/William Klein show at Tate Modern. Many of Moriyama’s influential and rare books (including copies of the seminal Japanese photography magazine Provoke (Purovōku), which also curiously only lasted three editions) were left inaccessible in glass cabinets with occasional prints from the books enlarged and placed on the wall. The book has been a longstanding tool for many artists to generate specific types of engagement with their audiences, as well as showing whole series of images in a coherent, manageable form. And this doesn’t even begin to touch on the idea of the book as an art object in it’s own right, that the book itself is a work of art.

But again and again galleries struggle to exhibit the content in a way that brings the content to life when not bound together. I don’t have any real answers, but what I feel is happening is a lack of creativity on the part of the galleries, tied to an assumption that people will read pages on a wall. I want more, though. I want to be taken somewhere intimate and personal, I want to become immersed in the object, and in general, I feel forcibly held back from this sense of intimacy with the object. I find this a problem because the book is a deeply personal and intimate method to engage with an art object and an artist’s work, and galleries are failing to repurpose this into the white cube. 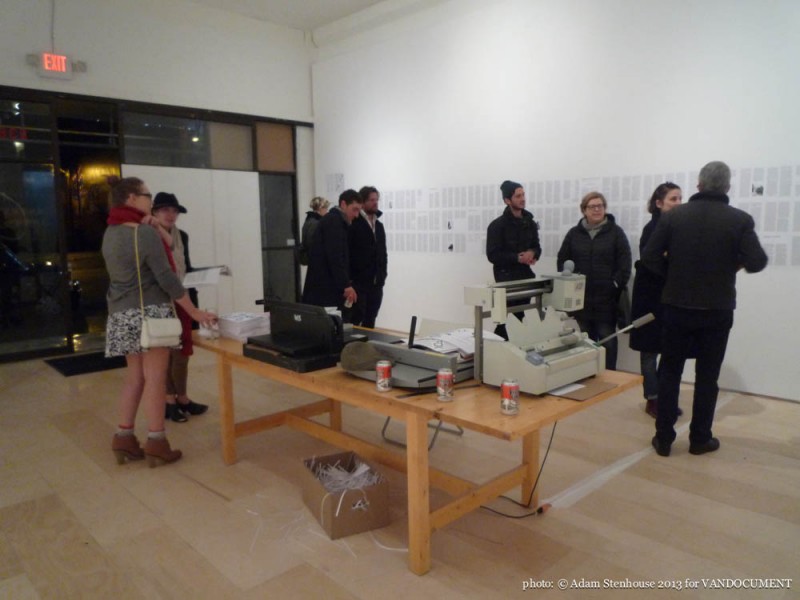 In a way, I think Re: The Fox falls into the same mistakes as these past exhibits; it is difficult to stand and read page after page of dense theoretical texts on a wall. But in speaking with both Higgins and Desjardin, they are open and honest that this is not an exhibit for everyone’s taste, that the nature of the material will leave some gallery visitors feeling alienated. This leaves a question of why? Why are they not making it more accessible?

However, I believe they are challenging this self-created barrier in several ways. Firstly, there are copies of The Fox on a central table, along with book making ephemera. Being able to pick up and look through, touch, interact with, and ultimately purchase the book is a major step for inclusiveness. 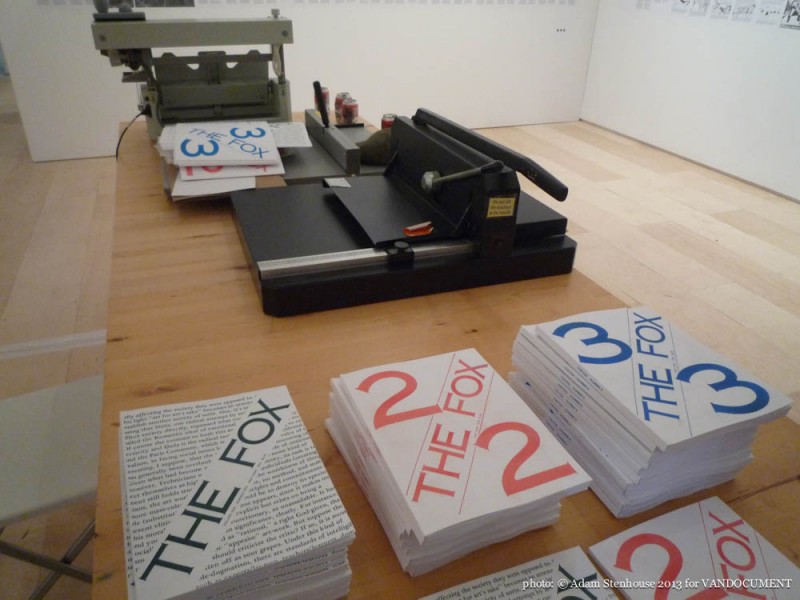 Secondly, and significantly, there is a series of events tied to the exhibition that offer a chance for the public to delve into the history and relevance of the journal. The Saturday after the opening, Desjardin was leading a public reading of one of the articles (The Lumpen-Headache) within the gallery space. The intention was to diverge away from the text into whatever conversation may sprout from the participants and audience. At the opening, Higgins said they are hoping to release a recording of this reading in the form of a podcast, and it is now up on their website. Other events lined up included an ongoing series of workshops on artist’s books run through READ Bookstore, an artist talk at Charles H Scott Gallery, as well as the release of Desjardin’s work The Book On Books On Artists’ Books at Satellite Gallery.

Through Re: The Fox, Unit/Pitt continues its trajectory of socially, politically and culturally engaged exhibits that move beyond the gallery walls into a space for public discourse. Re: The Fox may not be to everyone’s tastes, and though it doesn’t dispel my personal frustration with exhibitions based around books, this doesn’t remove the value of the work, or the ongoing, larger vision of the gallery. 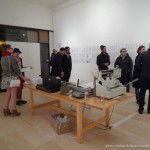 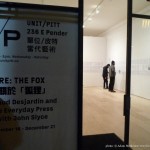 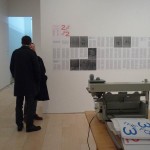 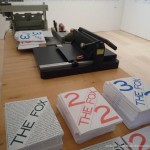