A personal reflection by organizer and participant Margarete Hernandez

Remember when we were children, and pencils and crayons were our basic tools for expression, and how easy it was to talk and play with other children while finger-painting on a crafts table or making castles in a sandbox? I had a lot of fun drawing and creating things as a kid, and I remember wishing that I could just do that forever.

An opportunity similar to this wish eventually presented itself, albeit not really forever, but a smidgen of it – for twenty-four hours. On August 10th and 11th (from noon to noon), the 24-Hour Drawing Party took place at Project Space in Chinatown. The idea was first concocted at a Project Space board meeting by Kristin Cheung, who then applied for the Vancouver Foundation’s Neighbourhood Small Grants, and with the help of Project Space and several volunteers, the idea became a reality. Snacks and art materials were procured, coffee was donated by Matchstick Coffee, and paper was donated by Hemlock Printers. 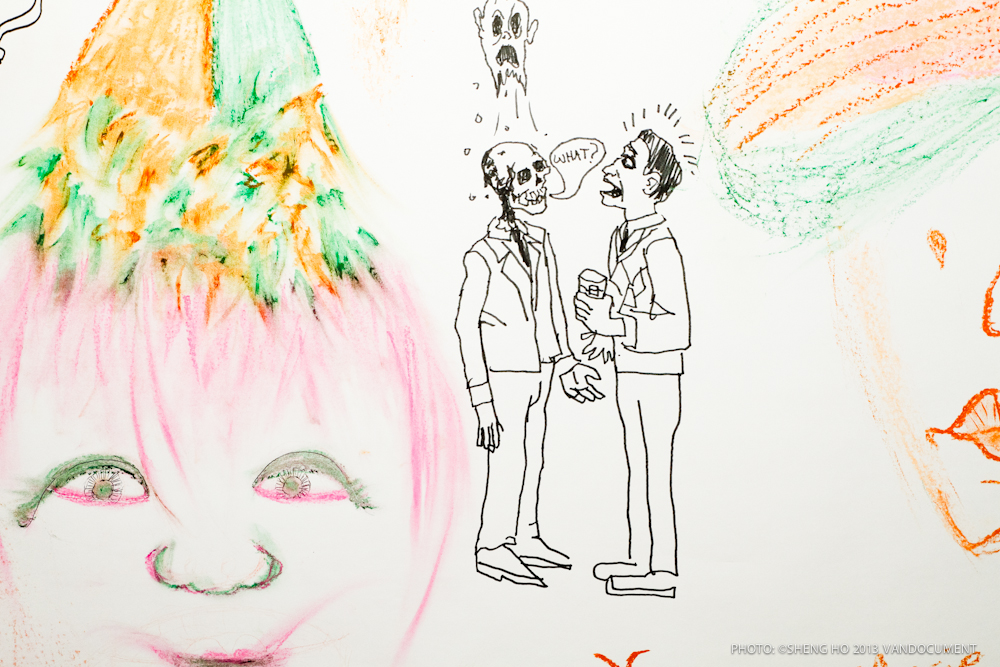 The 24-hr Drawing Party was a free, collaborative neighbourhood drawing event where community members, especially those residing or working the Chinatown area, were invited to draw, paint, doodle, share ideas, and meet other people in an accessible, non-intimidating environment. It was open to anyone and everyone – no matter what sex, gender, race, age, beliefs, or experience. 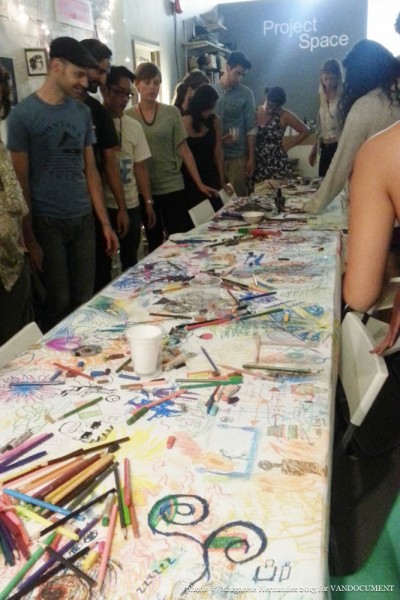 The space was well-lit, music was playing all-throughout, a long roll of paper was laid out on a makeshift long table, and art materials ranging from markers to paint brushes were made available to participants. A few workshops were also scheduled throughout the day to engage the public, such as upping one’s Pictionary game by Ray Hsu, a slightly smaller scale Late Nite Art collaborative art workshop facilitated by Julien Thomas, and also an art jam session by Annah Kassen – all free for everyone to enjoy. The twenty-four hour period was chosen to encourage people to stop by whenever they would like, whenever it was most convenient, or whenever they felt most inspired – and to stay for however long they would like within the time frame. 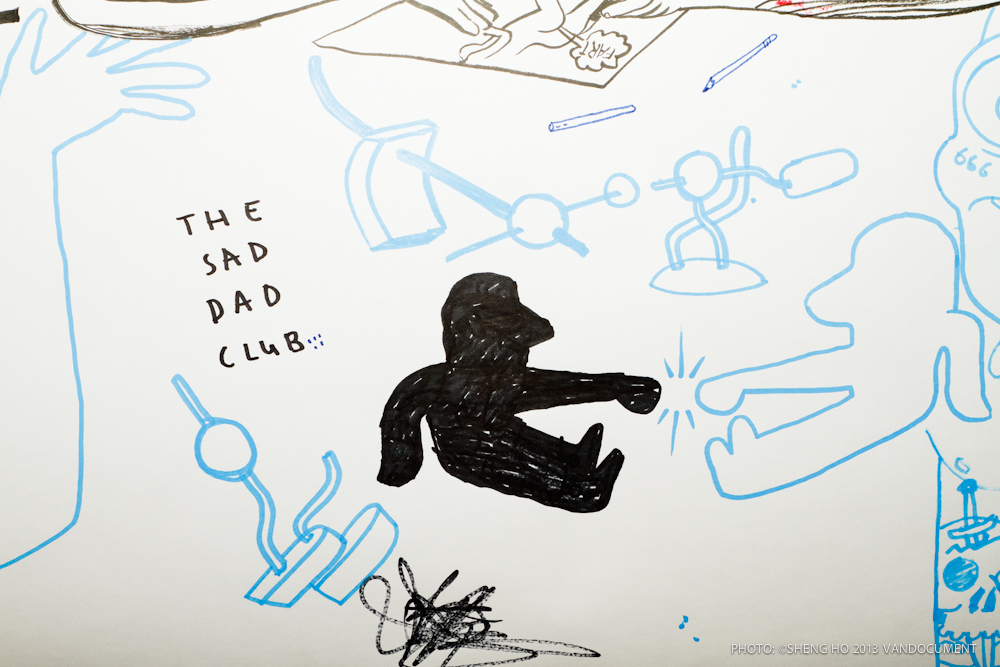 Upon chatting with Kristin, who was there the entire duration of the event, I learned that the first few participants were families with young children, all quite eager to fill up the empty white paper with colourful doodles of their favourite superheroes, cartoon characters, and pop stars. All throughout the day, curious folks in the neighbourhood, random passers-by, citizens who knew about the event beforehand, and even visitors from other cities stopped by, picked up their preferred drawing instruments, and added their own contribution to the artwork. People talked amongst themselves, exchanged business cards, shared food, and candidly gave each other tips and pointers. 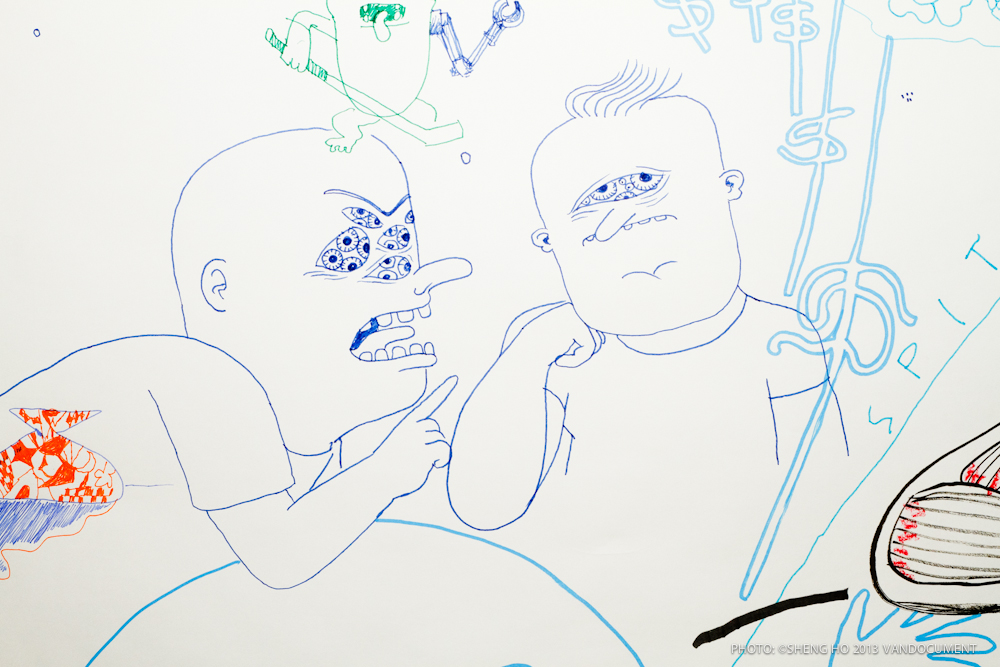 Drawing for twenty-four hours straight was quite ambitious; I ended up going for the graveyard shift, curious to see what creative creatures of the night could come up with. It was truly amazing to see the place packed with so much energy from diverse groups of individuals, some participating in Late Nite Art, which probed them to translate thoughts into visuals; while others were rather busily and excitedly drawing, slowly but surely filling every blank spot on the paper with lines and colours. 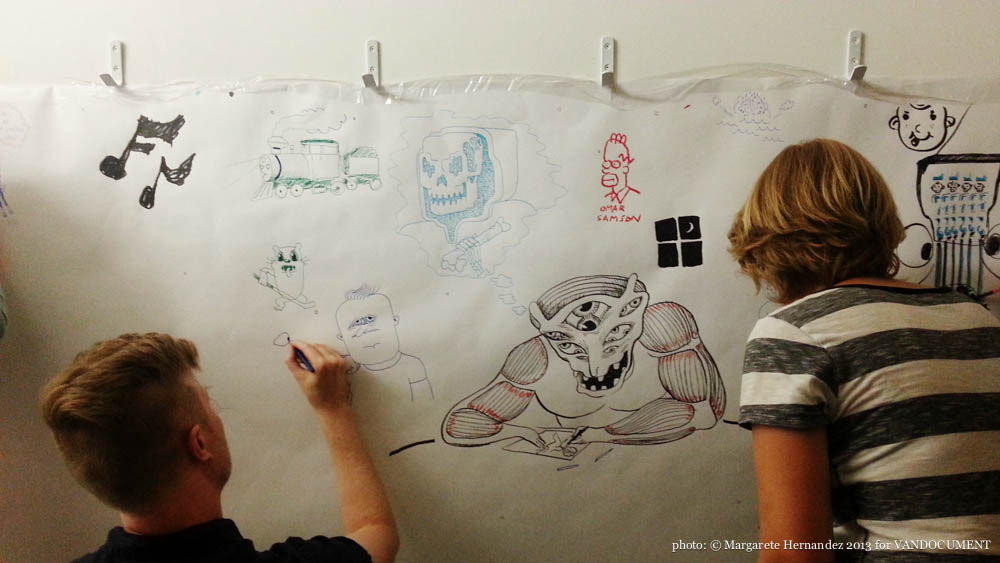 As the hours passed by and as the night grew darker, the event gradually quieted down a bit while some brave and passionate souls either remained intensely immersed in the experience, fueled by midnight snacks and coffee; or came back at the oddest hours fully recharged for even more drawing. Oddly enough, we had Bob Ross‘ soothing voice in the background to keep us company. It was a struggle to keep my eyes open up until the wee hours of the morning, yet I felt a wave of peacefulness and calmness as I was languidly yet thoughtfully doodling away. It was interesting how I was able to stay focused in the moment and yet was still very much aware and receptive of the what was going on around me. It was interesting how a shared public experience like this could so effortlessly tug at an individual’s personal creative and reflective processes.

I left Project Space at six in the morning on Sunday feeling spent, but also with a renewed enthusiasm for simply making things and for meeting new people. In the end, rolls of paper were filled with images of flowers, landscapes, unusual characters, abstract shapes, random lines and squiggles – absolutely reflective of the many individuals who took part in the event. 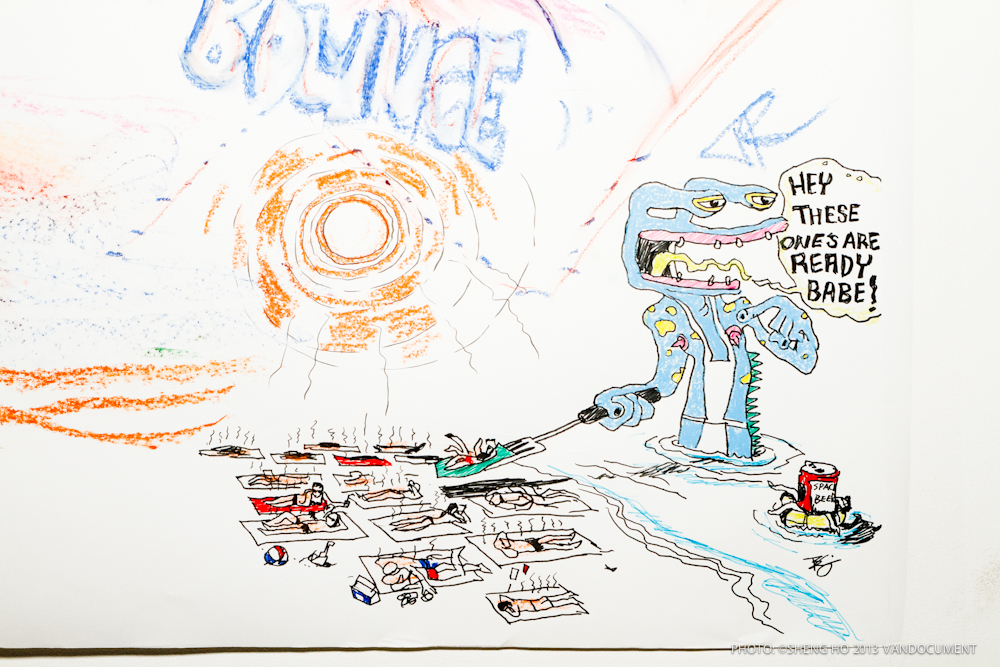 The general idea was to keep the event fairly casual, low-key, more like a hang-out, rather than a formal drawing session, and it definitely showed. With the concept that each individual is an artist, trained or not, either with years of practice or a complete newbie, social and personal presumptions about “good” art, talent, and aesthetics were set aside. The artwork evoked a sense of diversity within a community, of individual styles and of collective moods. In a city that has been oftentimes deemed as “no fun” or “clique-y,” the easy and welcoming atmosphere of the event combined with the coming together of various individuals from different walks of life to simply draw and doodle was a rather refreshing experience. 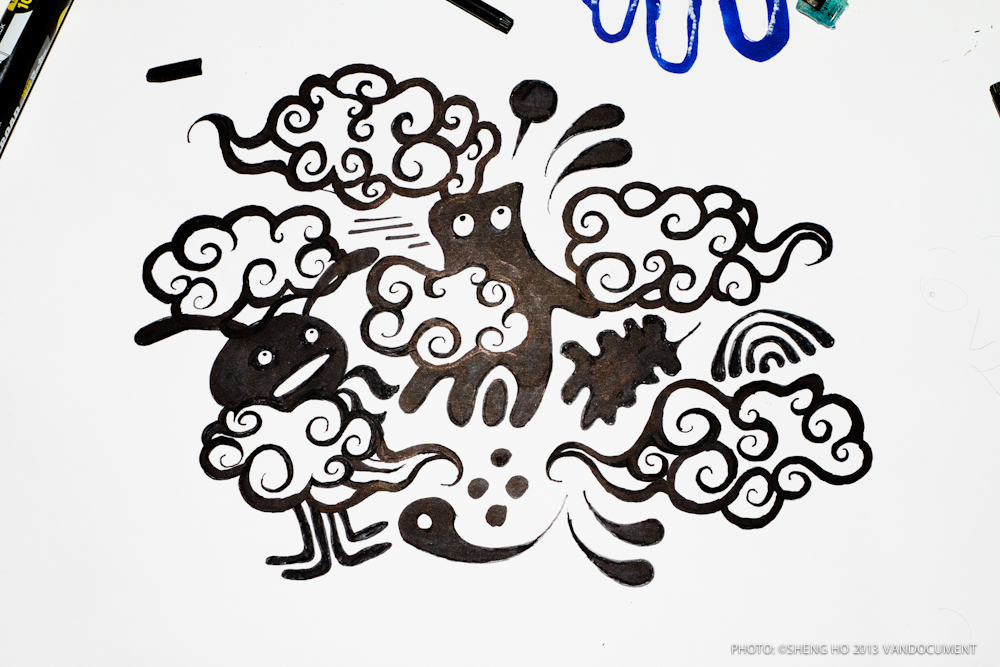