The largest Japanese Canadian festival in the country celebrates 37 years through a variety of food, dance, performance, and ceremony

Tomomi Morimoto dances with ghost stories of Japanese lore. Performing at the Firehall Arts Centre, she begins with her back facing the audience. Some of the audience is privy to the sight of a mirrored mask she holds still by the clasp of her jaw. 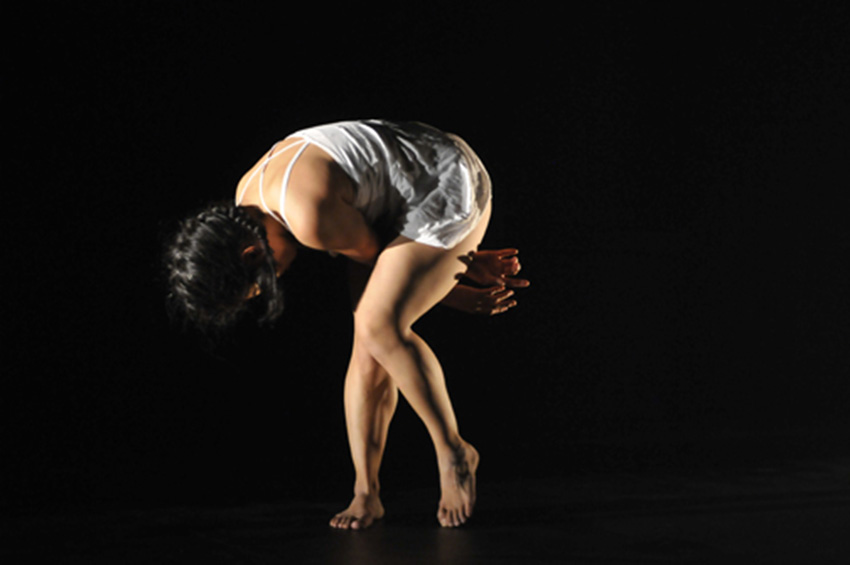 As she moves in fractions, we see more of the mask, and thus the contortions of her face. She moves her arms with rigid grace, in a locked but fluid connection to her belly. Her toes respond with articulated gesticulations. Her body and face lose transfixion then regain it in a breath, as though a wind has taken over the cells of her body. Her muscle bound, rhythmic squareness give way to a searching quality, the space around her moves like a smoke cloud being cleared to reveal materials, architecture and the animations of spirit. 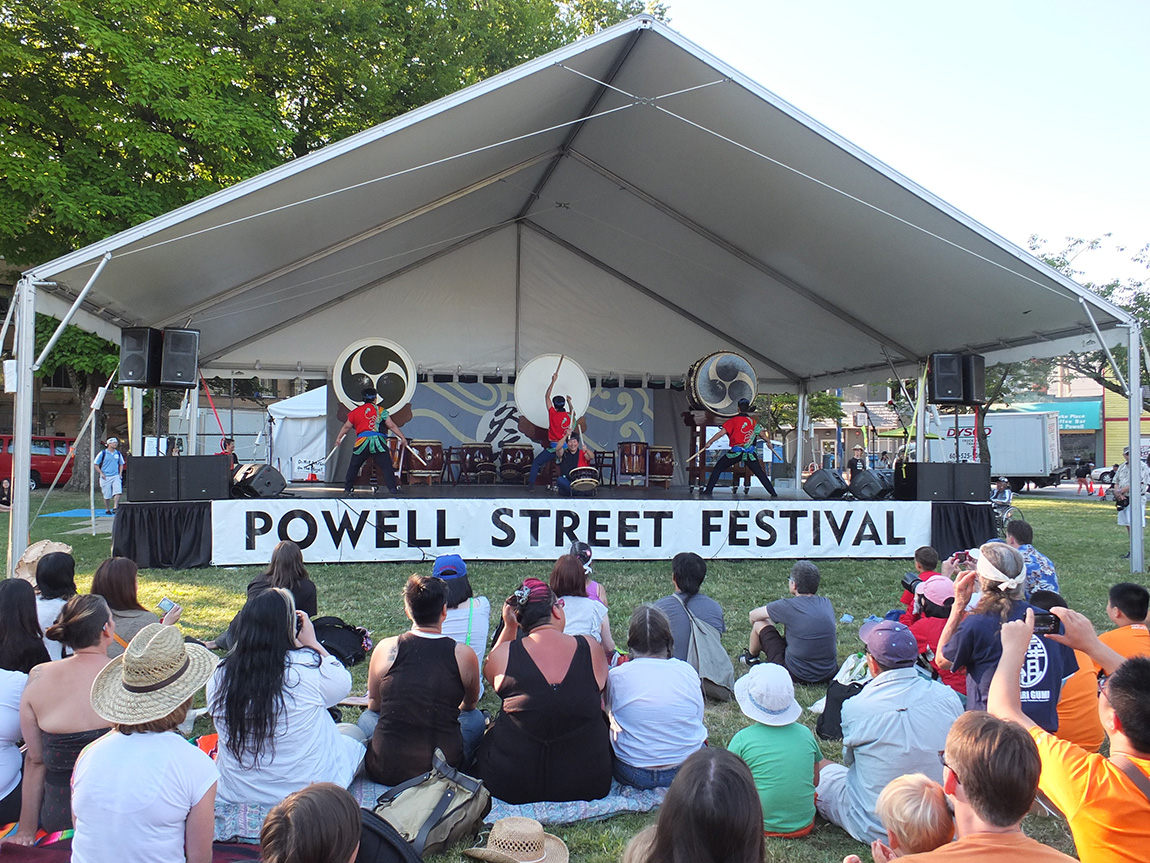 I bike over to the festival site, a couple blocks east of the Firehall Arts Centre. I am drawn into the park on Cordova, my nose leading me to begin my journey by satiating my hunger: smoky, meaty, sweet and umami, eggy, doughy. 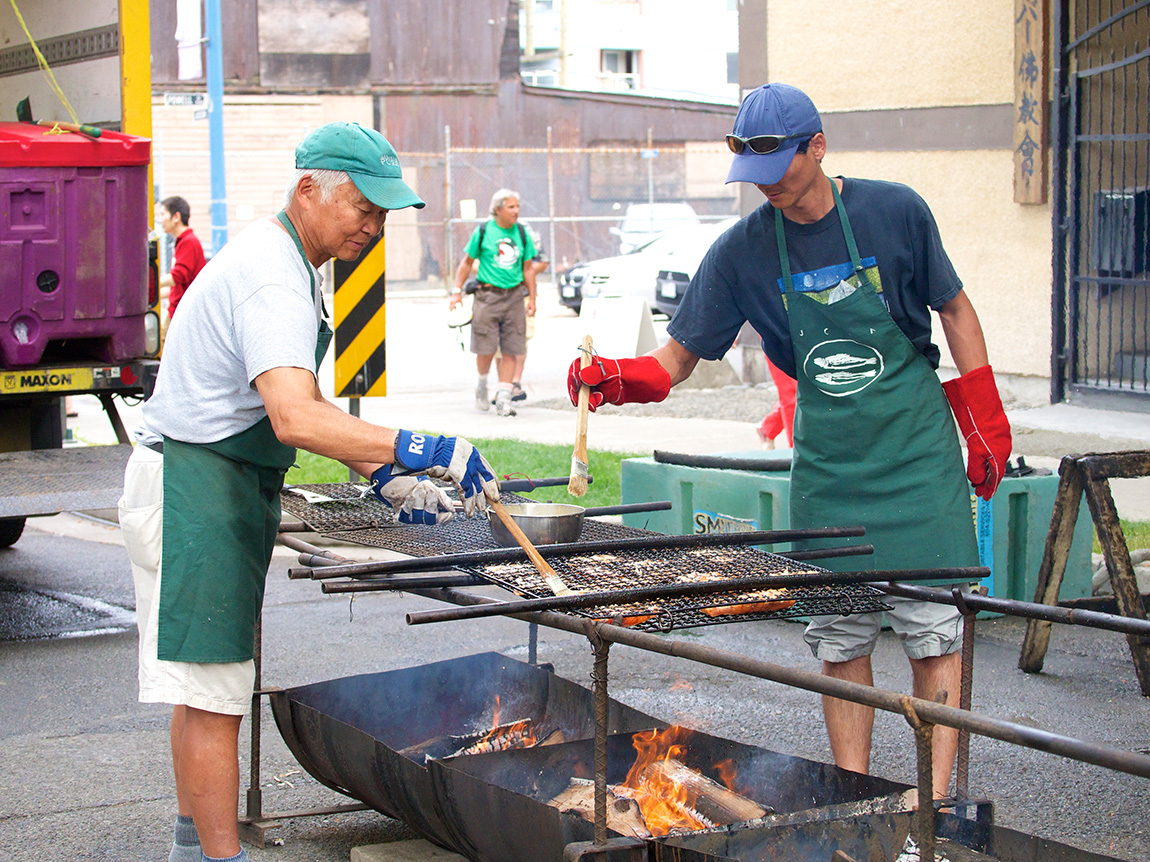 What I lunch on: veggie okonomyaki, a Japanese egg pancake with mayo, pickled ginger and bonito flakes, sakekasu cherry drink made from the fermented rice through making sake, and lastly, dorayaki, a sandwich of pancake batter and red bean paste. 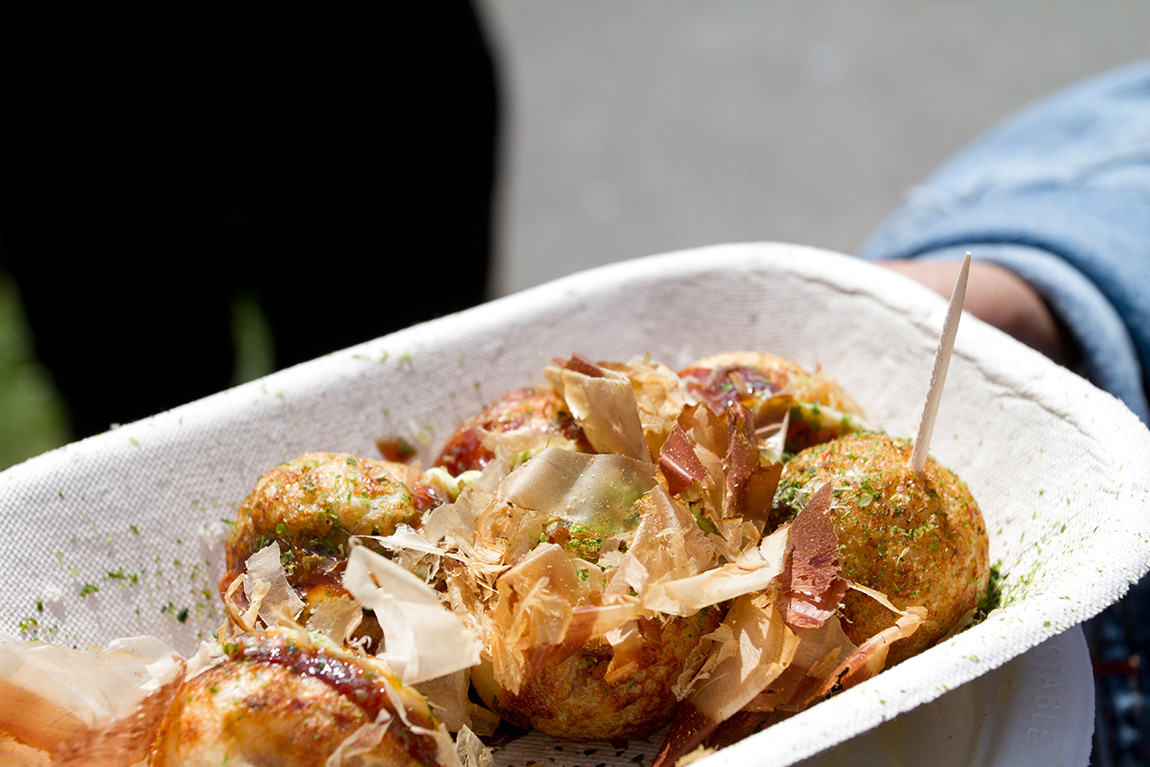 Things I see: Japanese soaps such as burdock, spell kits made of herbs, oils and incantation directions, baby clothes, crystal and Japanese character jewelry, LOUD the band: progressive folk rock with drummer Eileen Kage, a huge salmon barbecue, people softly snipping away at bonsai trees, a display of the history of Japanese Canadians depicted through photographs, stories, and news clippings, people receiving shiatsu massage, shaved ice with syrup on it. 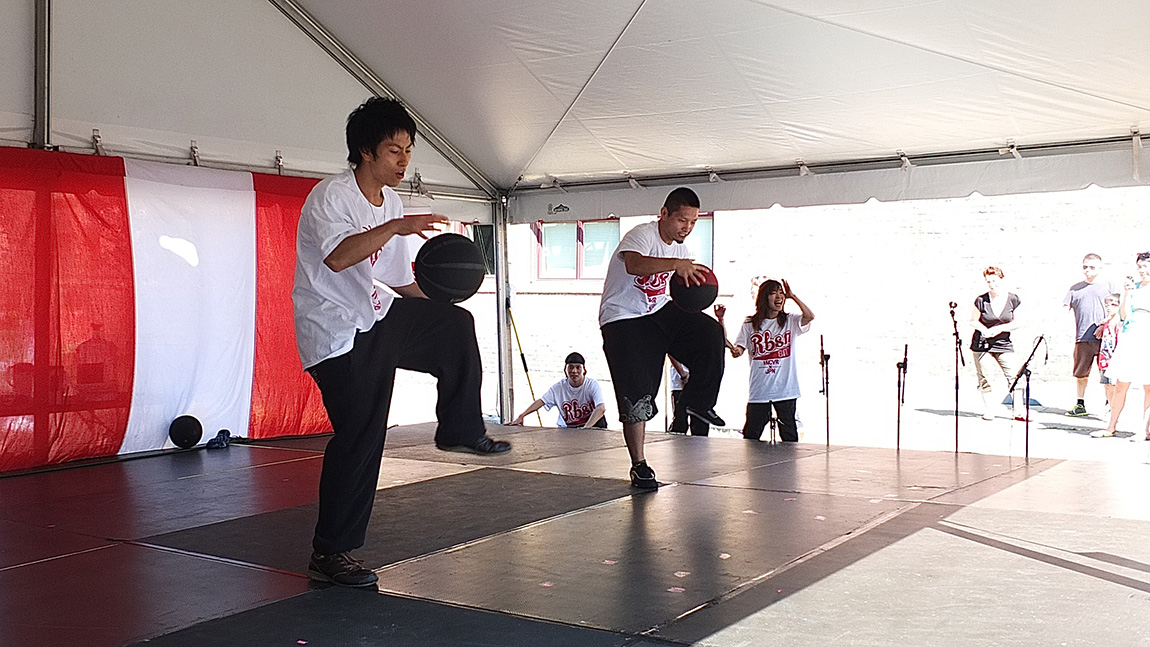 I wander a bit, and my timing at arriving at a stage on Dunlevy syncs up with the beginning of a show by Robson 800, an exuberantly high energy hip hop and breakdancing troupe. It is pure love of movement, strong support and teamwork, positivity. The bouncy choreography is infectiously happy: a basketball-juggling dance, balances, and tricks like flips and spins-on-the-head abound. I see smiles so big they are verging on the point of laughter; as though the funk of their groove comes directly from good, clean, true endorphins. The dancers cheer for one another, uniting in solidarity while celebrating personal flairs and technical prowess. 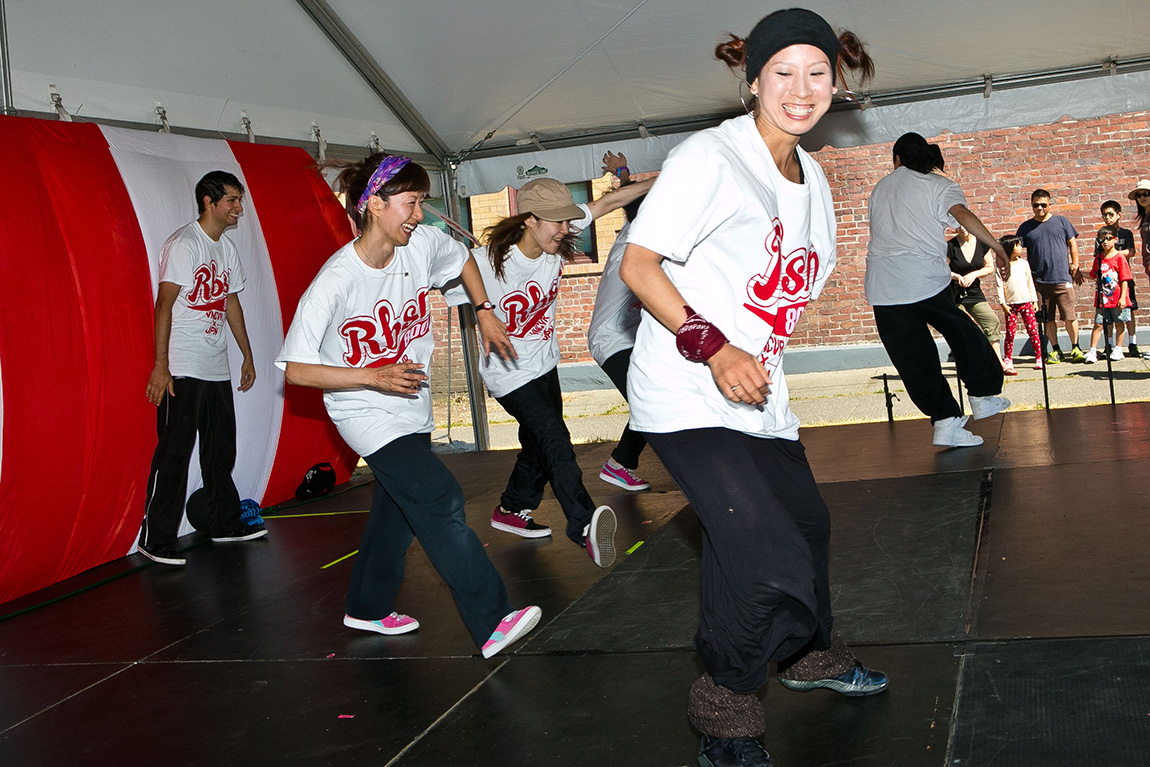 I choose to end my tour of Powell Street Festival with a Japanese tea ceremony, though the option of some shiatsu therapy was definitely attractive. I walk over to the Vancouver Japanese Language School and take an elevator to the 5th floor. Walking down a sterile hallway, I am greeted by an elderly Japanese man wearing a kimono. He motions for me to go into the adjacent room. It’s stunning: surrounded by windows, bright sunshine basking the traditional mats and wall partitions, the mountains of the North Shore become the backdrop for what comes. 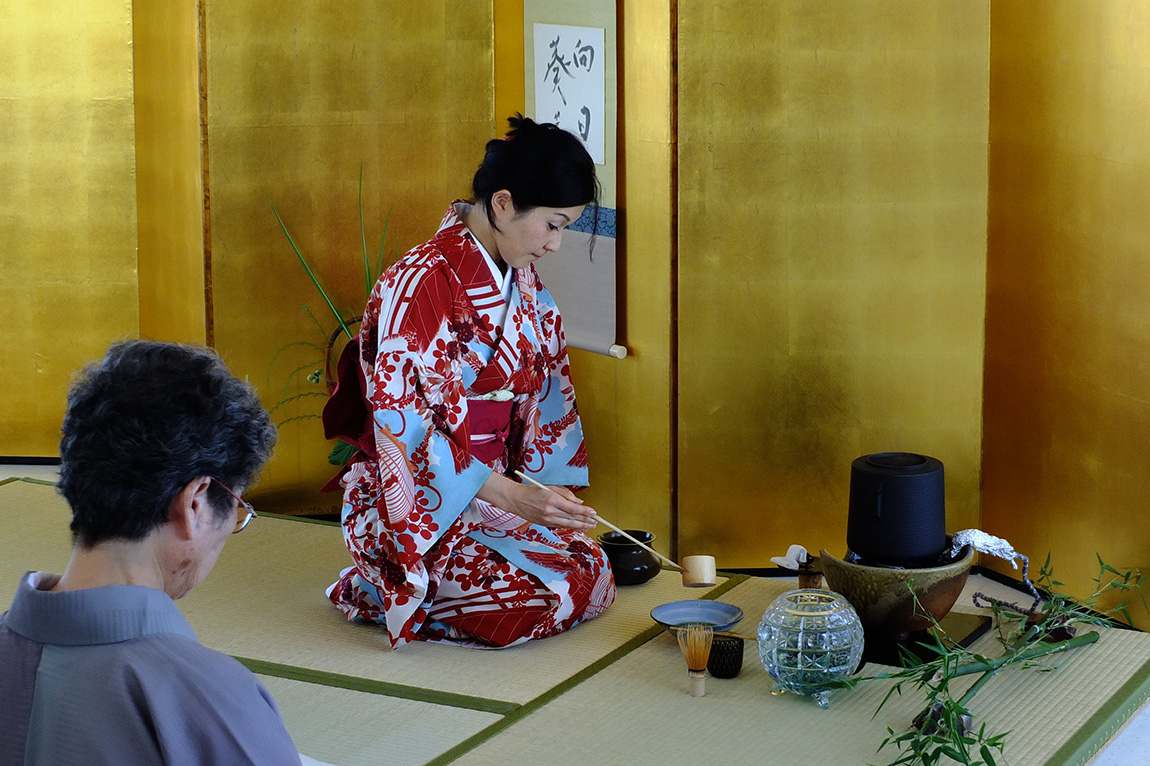 The woman leading the ceremony has already begun the process of preparing her tools. As she engages with each ritual implement, she is calculated and calm. She folds a cloth in a particular manner, cleans the matcha (ground green tea leaves) spoon, only to moments later fold the cloth in the same way again in order to clean another implement. Repetition figures prominently, and the choreography is smooth and respectful. I am mesmerized by her rhythm. 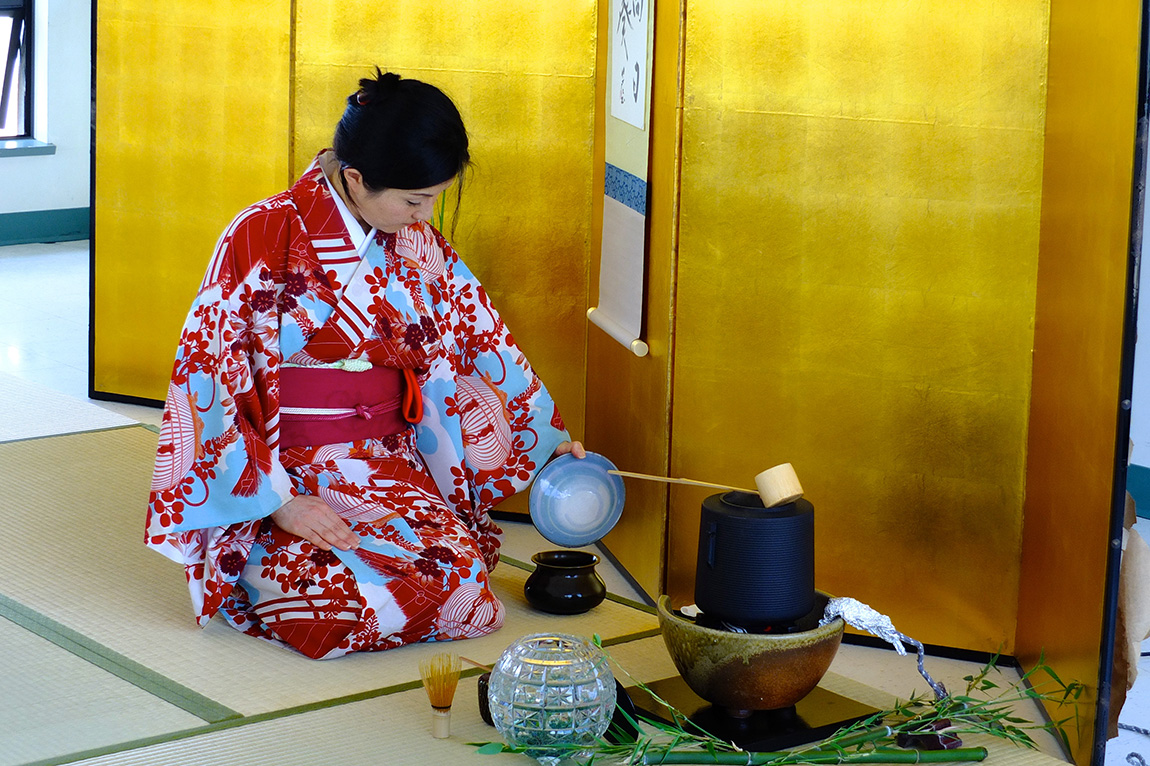 Three people are seated in front of her on the mat, their backs to the “audience.” Another woman stands up, and begins to explain to us the history of the tea ceremony, the process of learning the tea ceremony (there are approximately 300 ways), and the process of receiving the gift of tea. We are told that when we receive the tea, we are to turn the bowl three times clockwise, so as to protect the one-of-a-kind paintings that decorate the pottery from the wear of repeated sipping. It is important to look at the “scenery” in the bowl – the nature of the bubbles that arise from careful whisking.

The tea tastes more sublime than any other matcha I have had, and I have been drinking it every morning for many years. It is bitter, but has an earthy smoothness that I am unfamiliar with. Perhaps part of the reason it tastes different is on account of the process and history that I was able to share in, even if it was just a taste.

For more information about artists, venues, and more mentioned in this article:

Not Just Another Space