It’s Saturday night, almost 9pm, and we’re at the corner of Venables and Commercial.  Walking up to the old Astorino’s building, you wouldn’t know that there is an all-ages show starting in ten minutes.  Partially, because nobody is here yet, not even the opening band.  Partially because nobody shows up to shows on time in Vancouver.  It’s a thing- Vancouver Time.  If something is scheduled to start at 9pm, and you want to save yourself upwards of an hour of standing around awkwardly waiting for something to happen, show up at 11.  This seems to happen a lot at Astorino’s (affectionately SASStorino’s)  since the Safe Amplification Site Society (Safe Amp) started renting the space earlier this year.  It’s 9pm, the show is supposed to start, and nobody seems to care.

It’s still easy to see why people get confused about the space.  A charming, homemade sandwich board, with teal blue backdrop and hand-painted red letters indicate that there is, indeed a show:  “All Ages, Come In!”.  However, as welcoming as this lovely sign is, the actual building itself is a bit ominous, and even more so since the installation of a grey, wire fenced gate at the top of the two steps leading into the venue’s somewhat confusing entrance.  The more obvious and accessible entrance is locked, and gives off the impression that there is absolutely nothing going on in here tonight, but if you keep walking you’ll find the sign, likely hidden behind a small crew of folks smoking and chatting.

Once you cross the threshold into the “Red Room,” (named after the clear centerpiece of the room — a circular hole in the ceiling, complete with a mirror reflecting those standing below, a red light bulb, and a big, glittering disco ball suspended from the middle) it appears as though little has changed since the old days when it was a bingo hall in the 70s.  In fact, a now defunct BINGO board hangs on the wall to the left of the new makeshift stage that set, waiting for the first band to arrive and start the show.  A huge, empty floor spans a very long distance between the door and the stage, and I look around at other people looking around.  Nobody knows what to do.  It’s Saturday night, after all, and this is a dry venue. 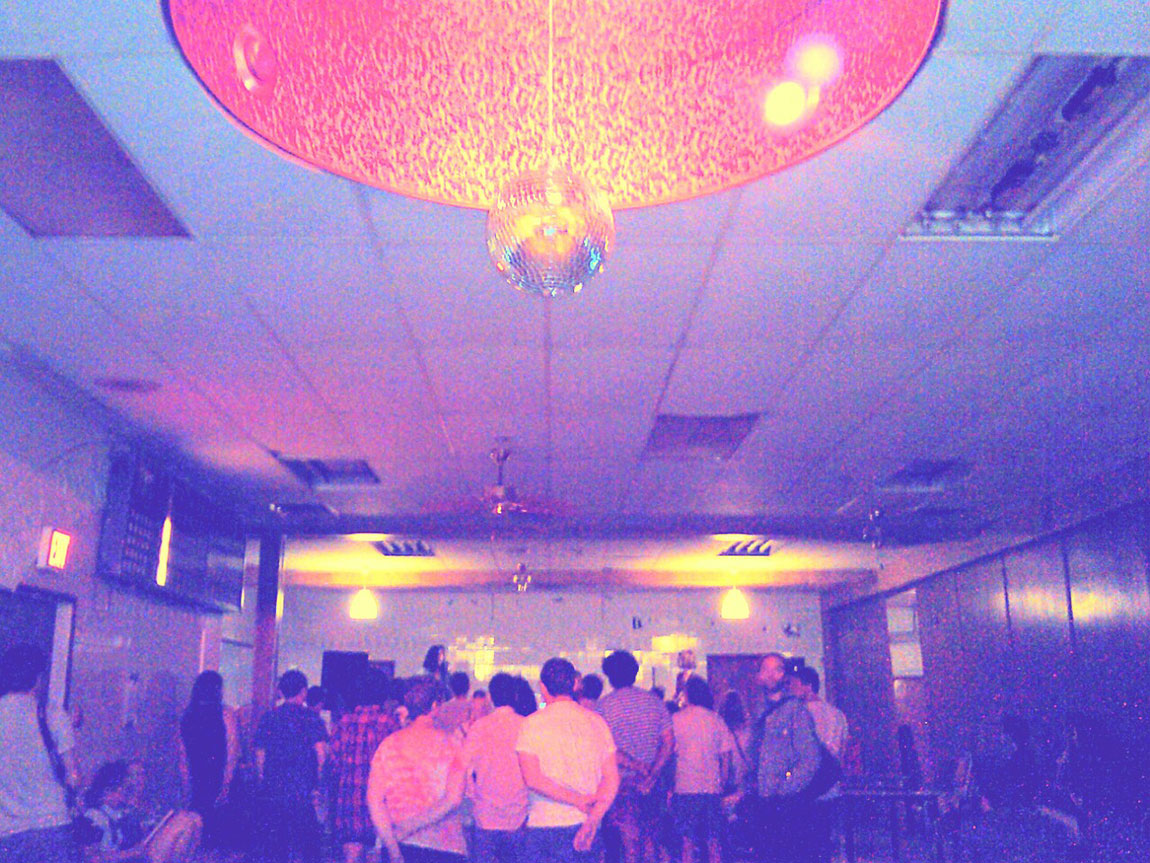 Safe Amp, a local non-profit, has been fighting for a legal, sustainable, permanent, all-ages music venue in Vancouver for years now, and as a bit of a compromise, has accepted a shared-space rental agreement through Britannia Community Centre for a short-term trial at Astorino’s.  The deal is somewhat less than ideal for the group, but a good way to test out the waters as far as running an actual venue goes.  As such, Safe Amp has taken over this massive, dusty, poorly-lit, cultural relic of a hall that, no matter how hard they try, evokes all the awkward/horrific feelings of high-school dances past.  And no alcohol in sight to calm nerves.

Shortly after 9pm, members of the opening act Kidnap Kids rush in, rosy-cheeked, and only slightly flustered, right on time to start the show.  I can’t think of a better venue for this band, who wrote most of their songs while still in high school, referencing their suburban roots, hanging out at Seylynn Hall (an all-ages music venue in North Van).  The three-piece casually strolls on stage and wishes everyone who’d bothered to show up early enough a happy 2009.  The infamous twosome of Alie Lynch and Celina Kurz shot straight into a solid set of banter sprinkled between original songs and covers, arguing over whether or not a dedication should really count if the person isn’t there, telling us anecdotes about heartbreak, dating, and what it was like to be writing songs in high school with your best friends.  If only more high school kids were in attendance!  They played to an audience of about twenty people, about half of whom were of a differently-lettered generation from the band.  Their songs are infectiously catchy, with clever lyrics and interesting stories woven throughout, and although they sometimes stumbled through false starts and a few mid-song hang-ups, they pulled off a successful set, for a room of people who it seems were content, but had also seen it all before.  A lot of crossed arms, a lot of uncertainty, probably wondering when they could politely run across the street for something other than the organic pop for sale at the door/concession stand.

Norvaiza, also known as Todd from the Winks, is playing next.  He’s been living in Montreal for years but has come back to Vancouver and has brought back some new tunes with him. It is quite amusing to watch the latecomers filter in; each one stops in their tracks when they find an incredibly hushed room and a surprisingly calm, solo set on a mandolin, with backing tracks playing through an ipod.  The audience sits politely, cross-legged on the floor, while Norvaiza’s songs dredge up a dreamy, beach vacation kind of feeling, which was very apt, since his straw hat and laid-back look screamed lucid escape. He holds his mandolin like it is an old friend; he clearly cares for it, but is familiar enough to be a bit rough with it when he sways it side to side throughout the set.  As lovely as the reverb-drenched mandolin songs are, attention spans start to wane, and as the set goes on, about half as many people are congregating outside as were once inside.  Those who stayed for the whole set clear out quickly as soon as it ends, while DIANE start to set up.

DIANE get straight to the point, with a loud, driving sound that mesmerizes the crowd and even gets some heads bobbing to the all-encompassing rhythm that never lets up, under a thick wall of distorted guitar.  More people have come in at this point, and the crowd’s general tone seems to be a bit more lively, presumably from the help of the social lubricants provided by some of the nearby adult beverage purveyors up the street.  DIANE’s set has an almost hypnotic effect on the crowd that seems to shake the weirdness out.  Everyone looks much more at ease.

Tonight’s show is a CD release party for Collapsing Opposites’ sixth full-length album, “Revolution is Now.”  The artwork from the CD is very minimalist compared to previous releases, featuring a photograph of grey pavement, with hot pink text for the album credits.  When you open the case, however, you find an image of the outside of the Red Room at Astorino’s, digitally altered as though the name of the room was actually “REVOLUTION IS NOW.”

Ryan McCormick, Collapsing Opposites’ songwriter/vocalist, has been a large part of the Safe Amplification Site Society for years.  He was one of the founding members of the organization, and has poured hours of work into taking the organization from a simple idea to an actual venue, where he is currently throwing an all-ages show.  By listening to the themes of this latest album, you can tell that his dedication to the all-ages cause is an all-encompassing labour of love, that spills into the music, and tonight, for those lucky enough to be here, into the vast space of the Red Room at Astorino’s.

The set is a live performance of the new 9-song album, and starts with a song that sounds like a protest march chant, over a repetitive loop of circus-like guitars. The band is ready to start, but the room is still nearly empty, so they start the music and wait for the crowd to filter in before shouting the opening line: “GENTRIFICATION! GENTRIFICATION NOW BEGINS!” The song is essentially a grocery list of things that are part of the problems that encompass our city, from cupcake stores, to music venues, ourselves included.  The song, and the album, are both incredibly self-referential, to the point where the chant ends in a repetition of, “PEOPLE AWARE OF THEIR OWN ROLE AS GENTRIFIERS!” The crowd is receptive, but not overly enthusiastic.  However, McCormick, now holding only a microphone, starts jumping around while singing on the floor, face to face with the audience.  The crowd looks mostly like they’ve just come either from the beach or the skate park, with sneakers and plaid shirts as the unofficial uniform for the evening.  Several people are standing with hands clasped behind their backs, but they aren’t bored, they are engaged- actively listening.  The lyrics are a pivotal part of Collapsing Opposites songs, and tonight, they have a message they’d like to get across- with a title like Revolution is Now there’s no room for misunderstandings.  Everything is pertinent.

As far as revolution goes, I’m not sure if it’s happening now, but soon.  But when McCormick tells the crowd, “You can sing along to this one if you want, it’s supposed to be an anthem for our generation,” you can’t help but feel proud to be part of this tiny movement of hope.

SASStorino’s will host shows for this year’s “Shout Back! Festival” which kicks off in the Red Room this Thursday, August 22nd at 8 pm. If you’d like to see more all-ages, sustainable venues and some great bands check it out!

One Response to Collapsing Opposites @ SASStorino’s

Wildlife Igniters, Peek A Boo, and the Glacier in the Main Ring