Art Bar at On Main Gallery

“I wanted to create something that is as easy to ignore as it is to notice,” Patrick McManus explained to to me as we sat in the temporary side-walk-cum-lobby of the On Main Gallery. Dressed all in black, his patterned white collar conjures the impression of a psychedelic priest appropriate considering the house he shares with a group of other DJs is dubbed “The Chapel.”

The creation McManus speaks of is entitled Various Points of Tension, curated by Matt Troy and presented Saturday night with a banquet of local electronic talent. The OMG Art Bar, organized by Paul Wong, is becoming an irremissable event on the first Saturday of each month. Its loose, underground feel is facilitated by the discreet location at VIVO Media Arts in the industrial pocket of Main and 3rd. Wong proclaimed the wonder of being able to hold a fully licensed and legit party until 4 am without noise complaints and police visits. 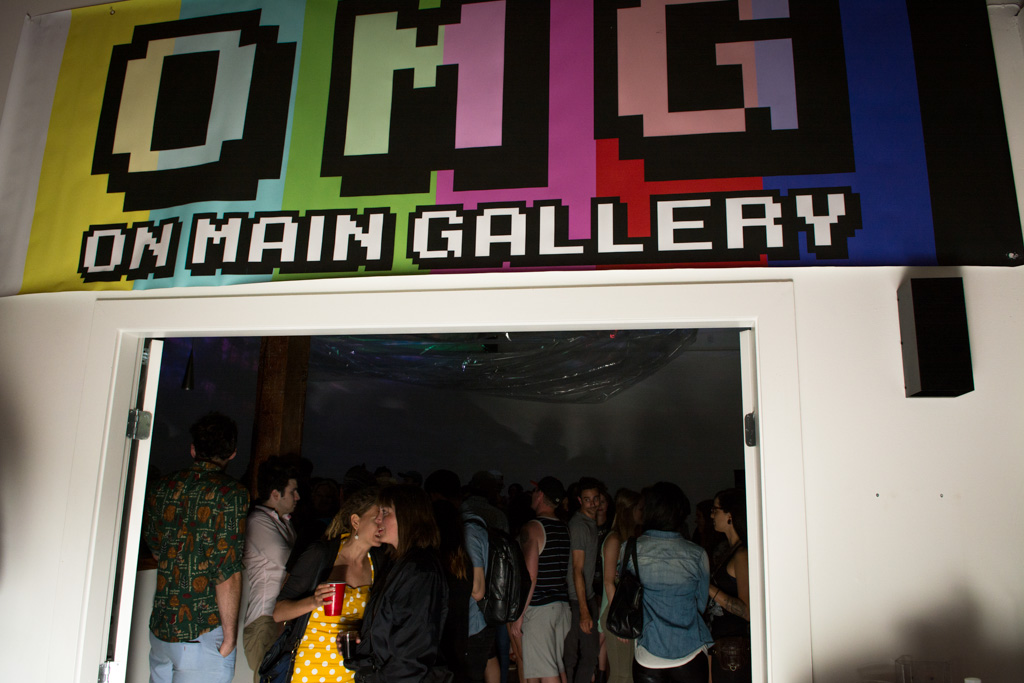 Entering the OMG Art Bar, I found myself immersed in the piece before fully noticing it. McManus’ installation was meant to be “minimalist, to be created by and on” the attendees’ bodies. The work is “half premeditated and half based in the space,” meant to explore the collective experience and the release of artistic ownership. McManus is refreshingly humble about the amount of work involved. The work itself consists of huge clear plastic sheets, machine-sewn to create a tense tapestry hanging from the ceiling. Three projectors at different angles attacked the plastic with crystalline refractions of rainbow light, while a metallic fan stirred the volatile prism. 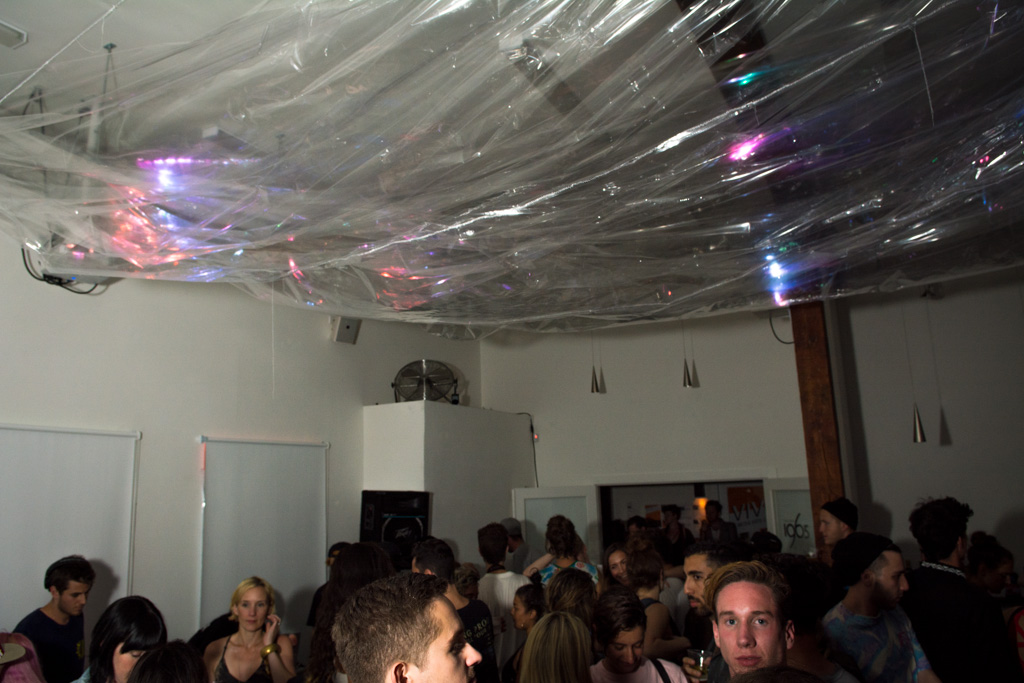 One corner of the room swum with a watery projection, like the technicolour ocean of another planet. As McManus reflected on his work, the aquatic theme revealed layered intentions; “The materiality reflects the imagery, so in that way it’s reflexive.” Along with liquid subtlety and existence beneath the surface, like the DIY bar scene, McManus is intrigued by the ripple effect. “Painting [his usual medium] is about collection but this is about letting go.” Like music, an interactive installation involves diffusing inspiration through the collective experience and hoping it causes a tidal wave in someone else. His technical language belies a brief brush with Emily Carr, but the young artist is thoughtfully composed and freely eloquent. Many commented on the installation with party-brain positivity, with quotes including “wicked awesome,” “fucking trippy,” and “oh, was that the art piece?” 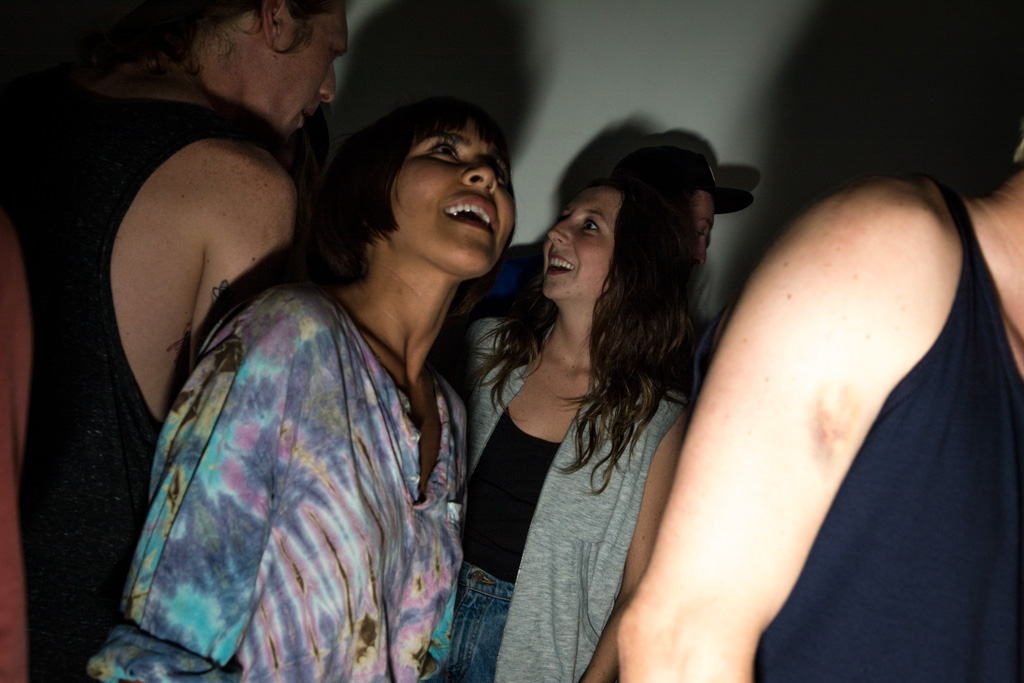 As McManus stressed, the music and listeners were essential parts – the energy and canvas – of the piece. Neural, synaptic tessellations of light covered the floor, stuttering and spasming with blows from two Peavey speakers until bodies arrived to absorb and reshape the subtle images. And those bodies came to dance. 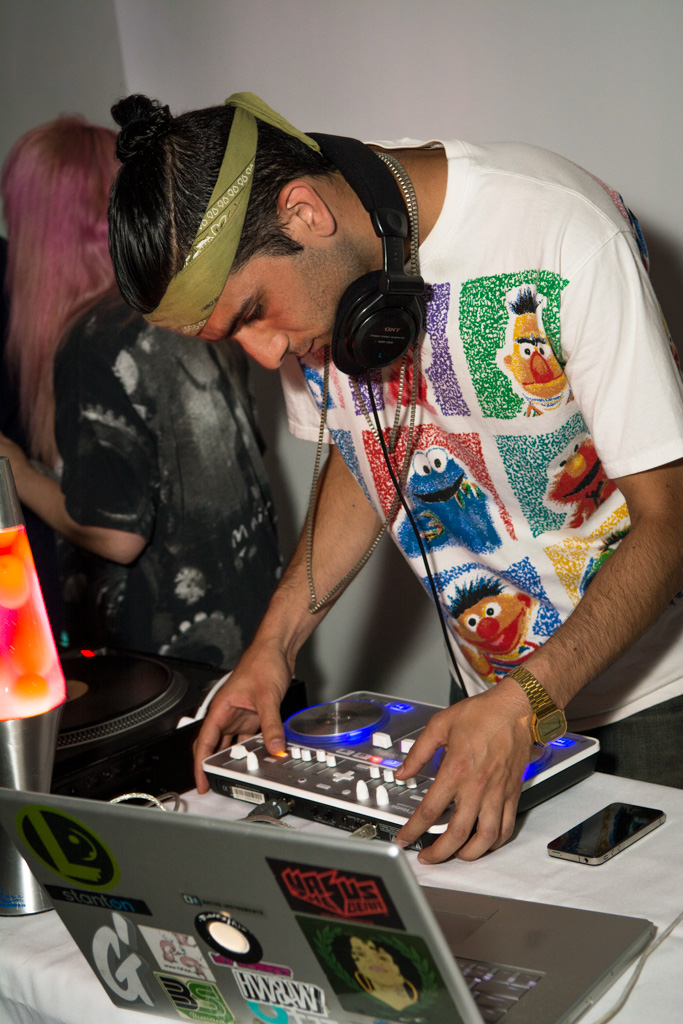 DREΔM DI❂R kicked off the evening with tight, bouncy beats from a sleek little deck resembling a Gameboy crossed with an iPod. He set the era-bending tone in a Sesame Street tee, by the light of a lava lamp. When I asked Patrick about the significance of this object, as it seemed to represent another layer of tension and fluidity, he laughed and shrugged. “It’s sort of become a mascot at the Chapel,” just an inside joke. 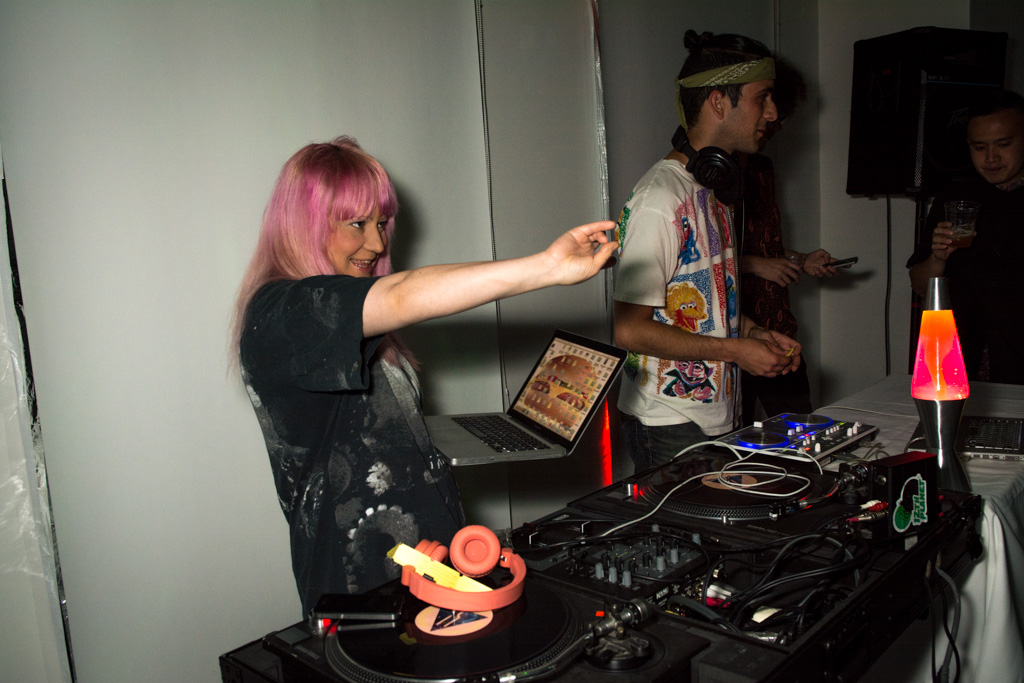 Cherchez La Femme, the tour de force behind Happy Ending Fridays at Fortune, muscled out some nostalgic 90’s jams. With pink headphones growing like futuristic extensions from her bubblegum hair and a shadowy Ministry shirt, the last song I expected to hear was 112‘s “Peaches and Cream.” Yet the organic beauty of real vinyl and her ability to ensoul the room spoke of 24/7 dedication to the craft. 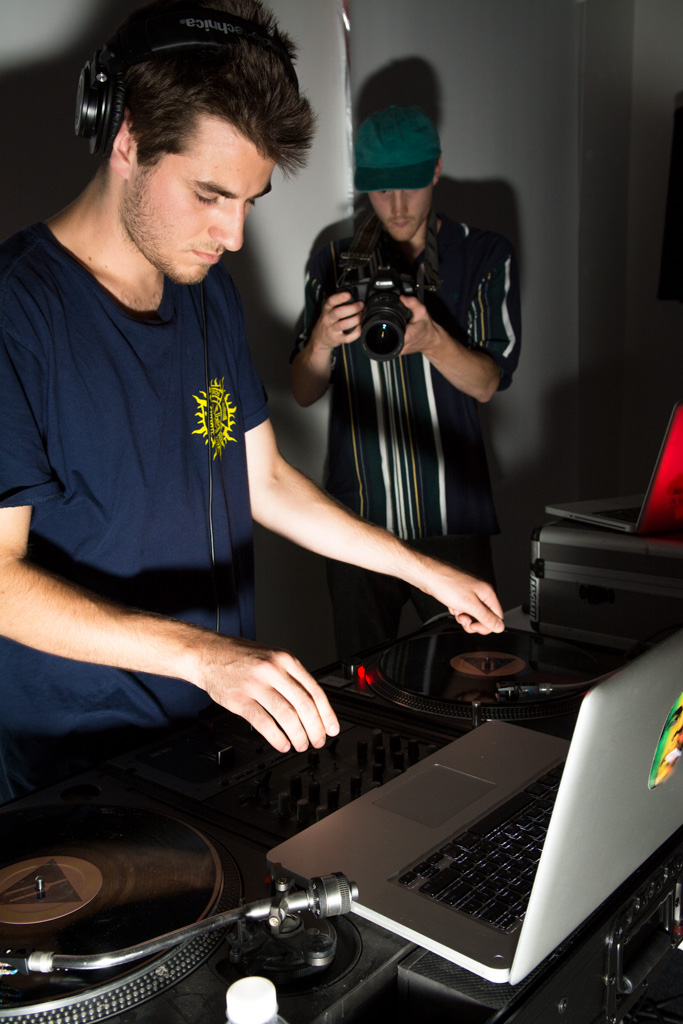 By the time 8prn began, the room was comfortably packed. Heavy, heavy downbeats inspired spasmodic clapping and footstomping, with euphoric tones drifting over housey melodies and distant loops of feminine voice. He was stoically focused, yet able to banter simultaneously with Cherchez La Femme. Fascia-straining movements abounded beneath crop tops, an inexplicable number of baseball caps and collared shirts worn with professional abandon. 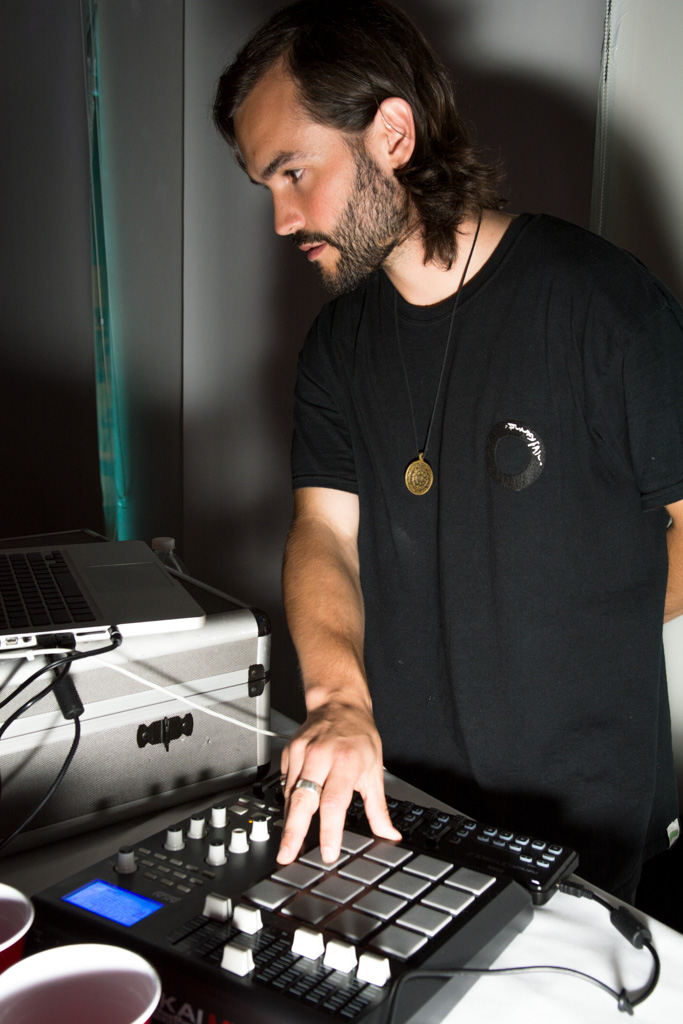 As the room heated up, HeadSPace brought in some seething slow jam loops. Tweet sighed, ‘oops, there goes my shirt up over my head.’ Oh my.

Next, Heartbeat(s) mixed industrial high-end noise seamlessly with sassy R&B loops and trance vibes. As he spun, a purple light-ghost wandered eerily up the wall behind him and distant galaxies danced on the sweating bar staff. Tyler Fedchuk of the infamous CiTR spot RadioZero, AUTEM and KLINE kept the audience melting ‘til 4 am with the unique magic of a tight-knit group of fantastic DJs in a small venue. 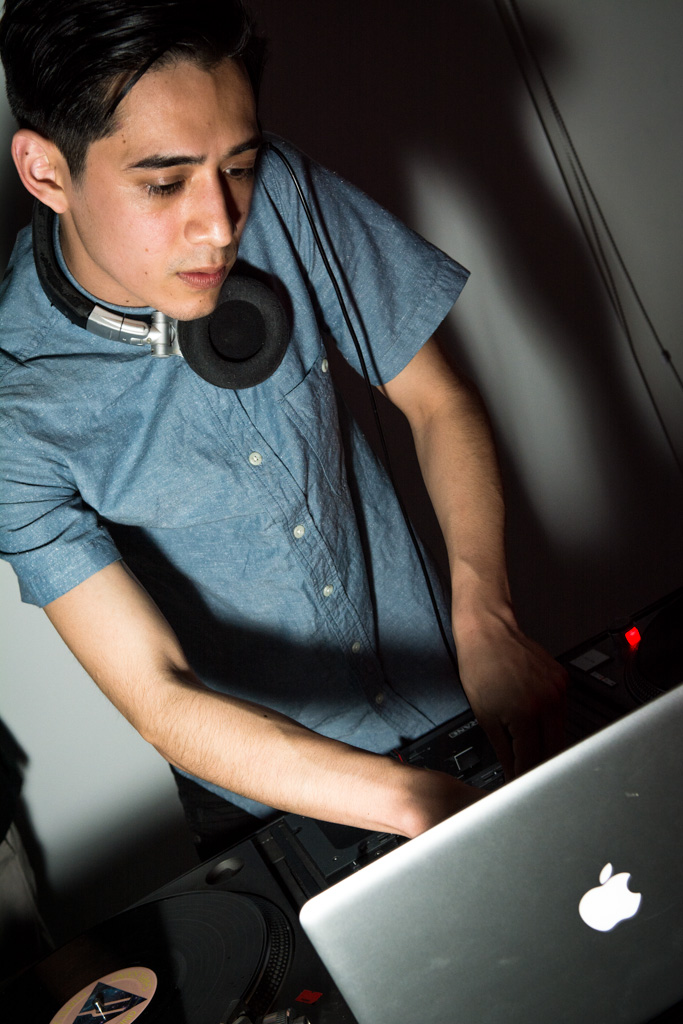 By the time I left, the lava lamp’s few pink globs had undergone extensive mitosis, broken into hundreds of dribbling beads of wax and heated up to near-full incorporation with the orange solution. 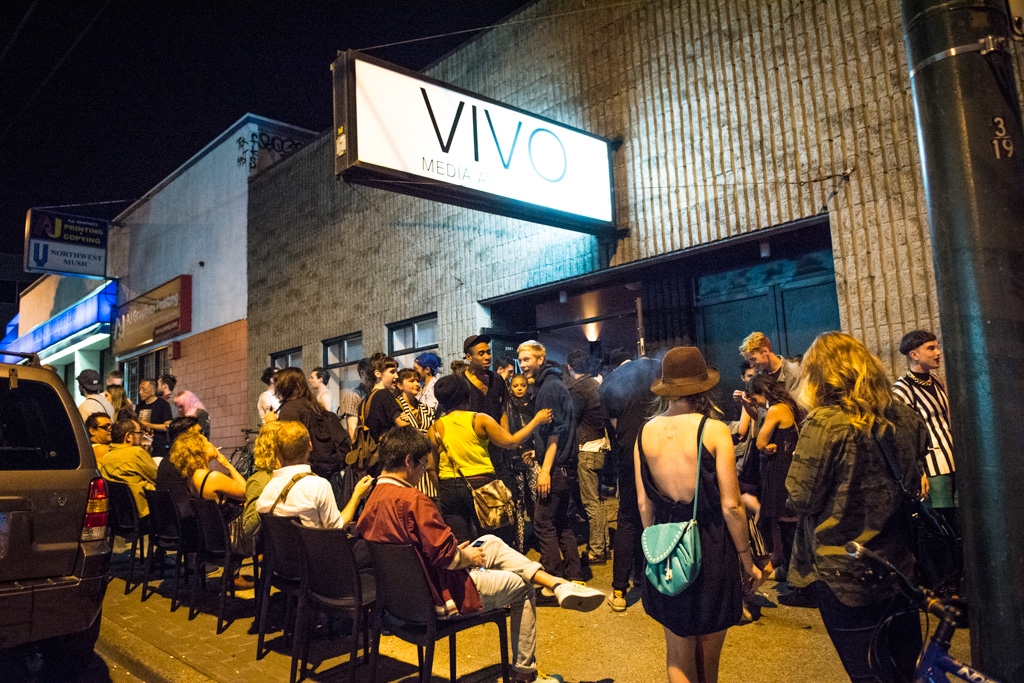 Outside, a crowd of hip young cats slunk beneath puffs of smoke. I watched Patrick McManus, with hands folded quietly, become enveloped by an amoebic bear hug of friends chanting his name.

Paul Wong seemed thrilled at the ripple of energetic potential sent out by this night. He reminded me as I left that sometimes the first Saturday of the month can also be on the third Saturday and, especially in the art world, “Tuesdays can be Saturdays too”. 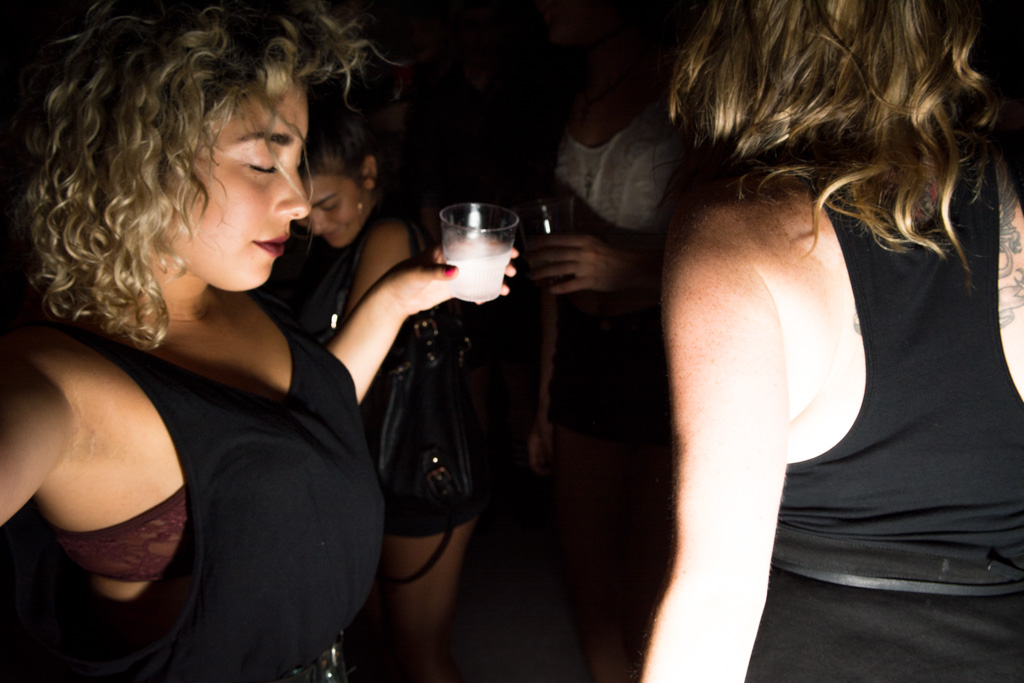 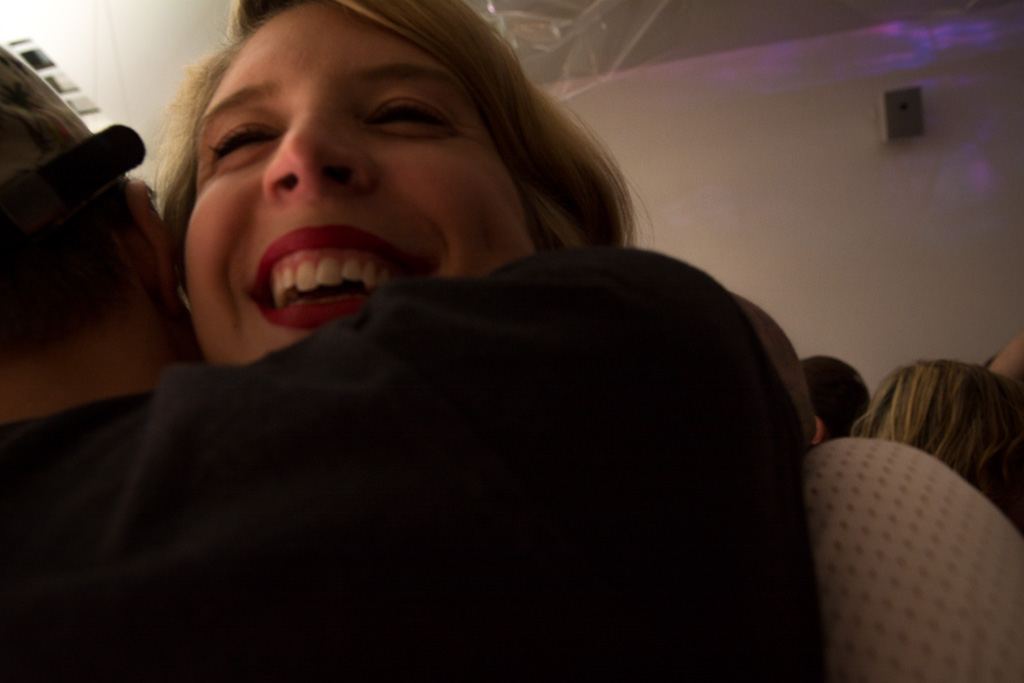 For more photos of Art Bar at OMG, check out our massive gallery here!